This year was my second year running the Army Ten Miler (recap from my first time is here). I am a military brat (my dad seven in the Air Force for over 22 years) and as such, I love all the military races. The ten mile distance is also my favorite to race, so I try and sign up for them whenever I can. This was just my second time running the Army Ten. I knew two weeks after Berlin that my legs might not want to go fast but I thought that if I could run marathon pace for the race that would be a good step towards possibly running another marathon next month. 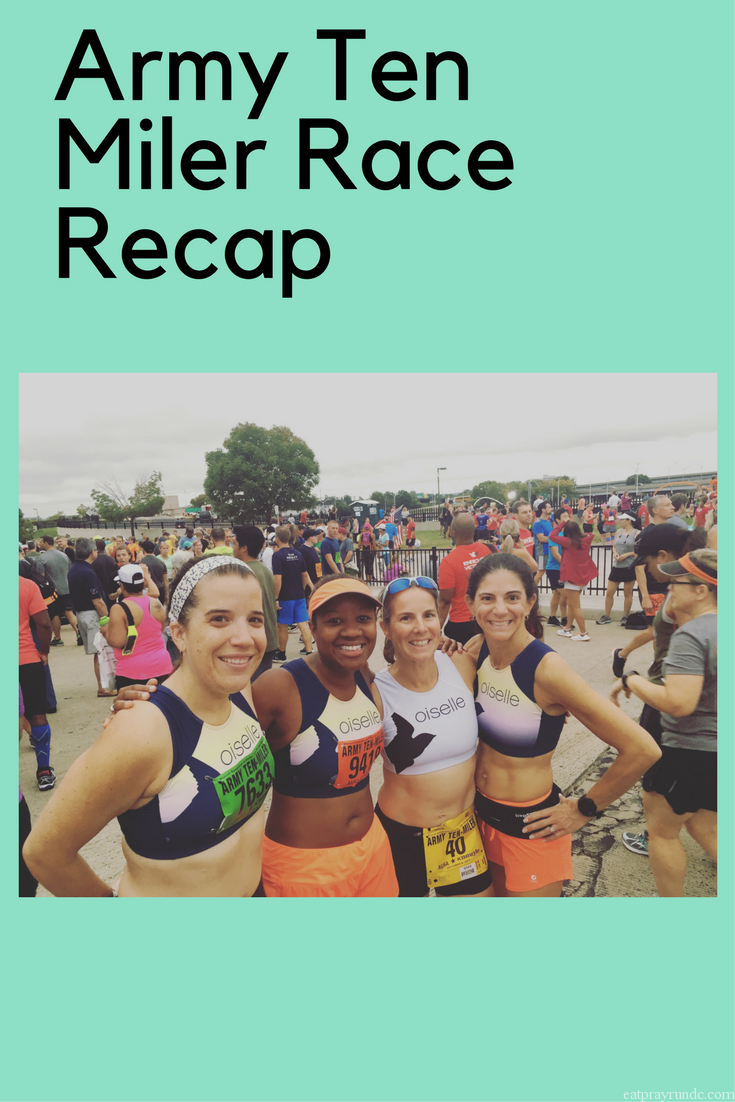 Race day was incredibly warm and humid. In fact, about 25 minutes after I finished, race officials turned it into a fun run because the weather was so bad and many were needing medical attention. I have run eight marathons and I have never seen so many people being carted away on stretchers as I did during this race. It was really crazy and I was think the race directors did the right thing. Anyway, on to the race. Like I said, I wanted to try to average marathon goal pace – so in the 9 minute mile range. With the weather, I kind of put that goal to the side and vowed to run by feel.

I started the race with my friend and Oiselle teammate, Emily. We both said that given the weather we were not going to try and push it and wanted to run together because that is always more fun. This was my first time racing in a crop top and holy heck, I was glad I made that choice – the humidity was just overwhelmingly oppressive. It felt like a throwback to Berlin – but about 15 degrees warmer. UGH. Emily and I started out at a comfortably hard pace and tried to settle into a rhthym. We chatted and both reaffirmed that neither of us wanted to actually race the race – we were happy to just run. But when we reached the first water stop, I lost Emily, which sucked because that was only a couple of miles in. Boo but the race continued on.

As you can see by my splits, I was getting incredibly hot and uncomfortable. This also was the miles that contained the 14th Street Bridge. And I HATE that bridge, haha. It’s long and hot and boring and just seems like it goes on forever!

At this point, I was just ready to finish as soon as I could. I was hot and dripping sweat everywhere and it felt like I was swimming. I passed a mom and a little girl cheering and the little girl said, “mommy, why are they all so wet?” All I could do was laugh. I kept telling myself in the last mile, “your body will do what your mind tells it.” I’ve never used that mantra before but it worked to get me to pick it up a bit in the final mile.

1:31:06 official time – not a PR of course, I was not racing. I was really proud of myself for pulling out that time in such terrible conditions. I was VERY happy when I crossed that finish line!

Have you raced recently?