Chilly and hilly. That is my short version of my Annapolis Running Classic recap. It was pretty chilly & the back half of this race is HILLY. BUT as chilly and hilly as it was, I had a really great time. 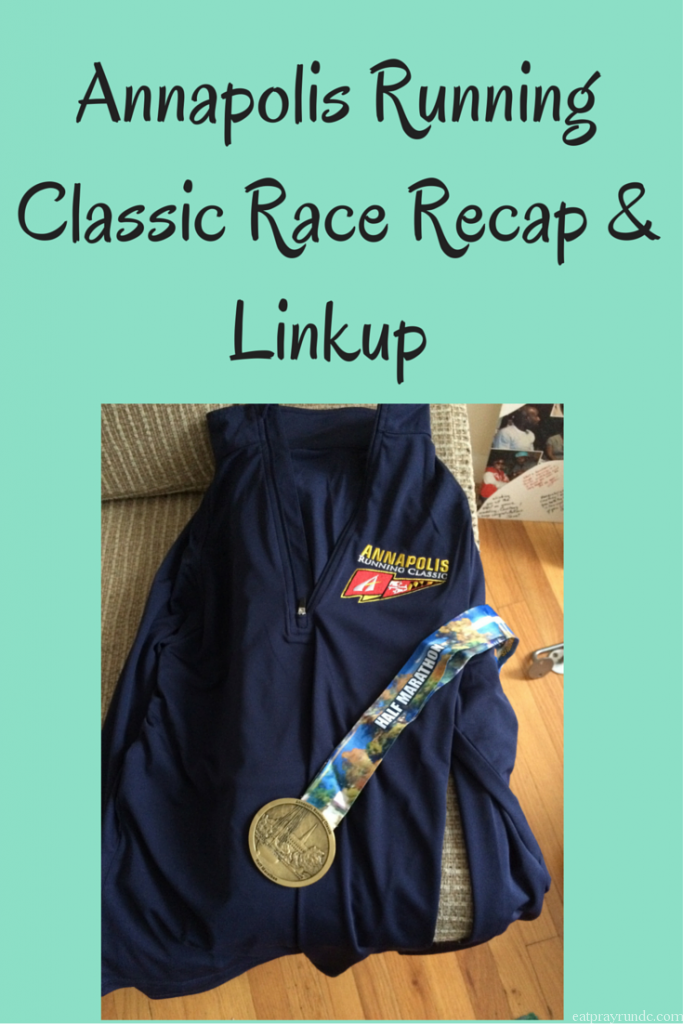 As I’ve mentioned, this was my 20th race of the year and I was determined to take it easy. I knew the course would be much harder than Richmond due to the hills and so I knew I’d go slower. I started the run with my friend and Oiselle teammate, Caitlin, who was running the 10k. To be honest, I kinda wished I was running the 10k as well! But that’s only because my little legs were tired and nervous about a hilly race. With one of the funnest announcers I’ve ever encountered on a race course, we were off right at 7am. 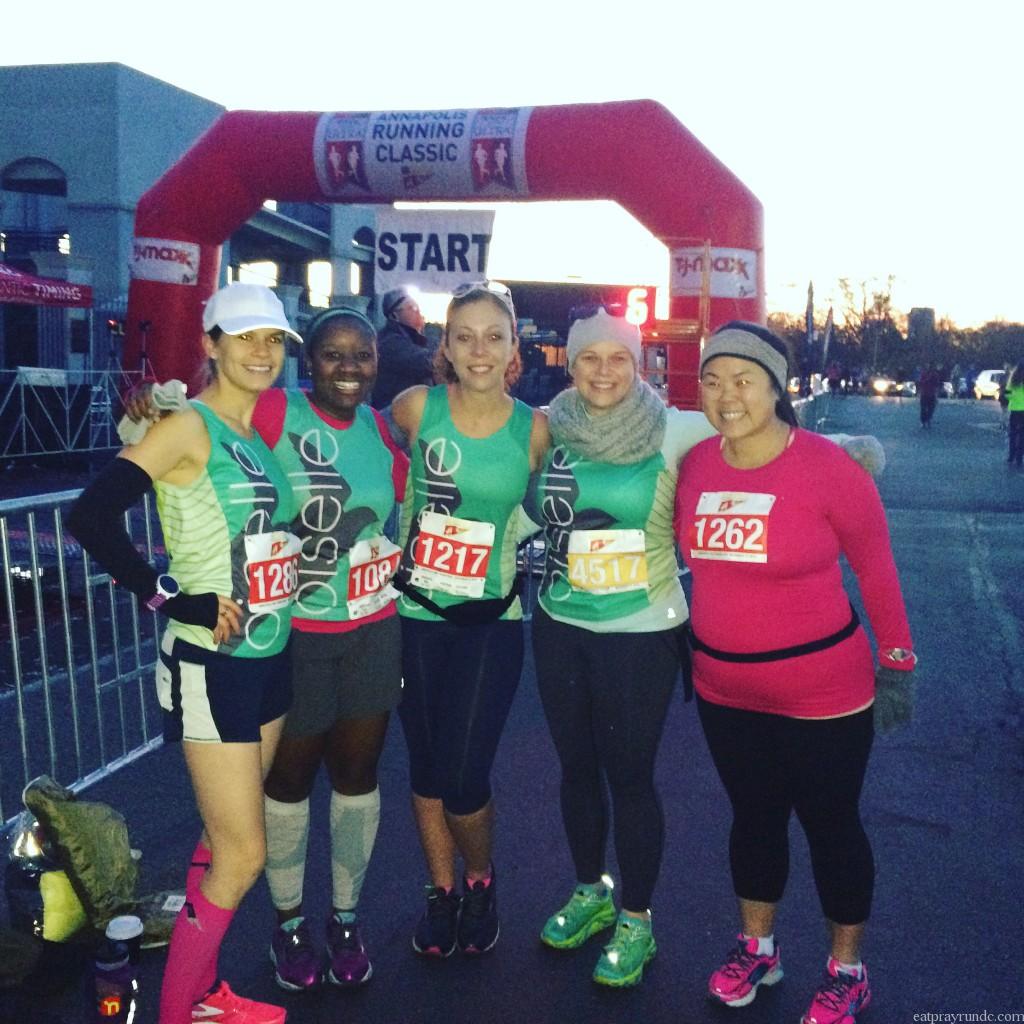 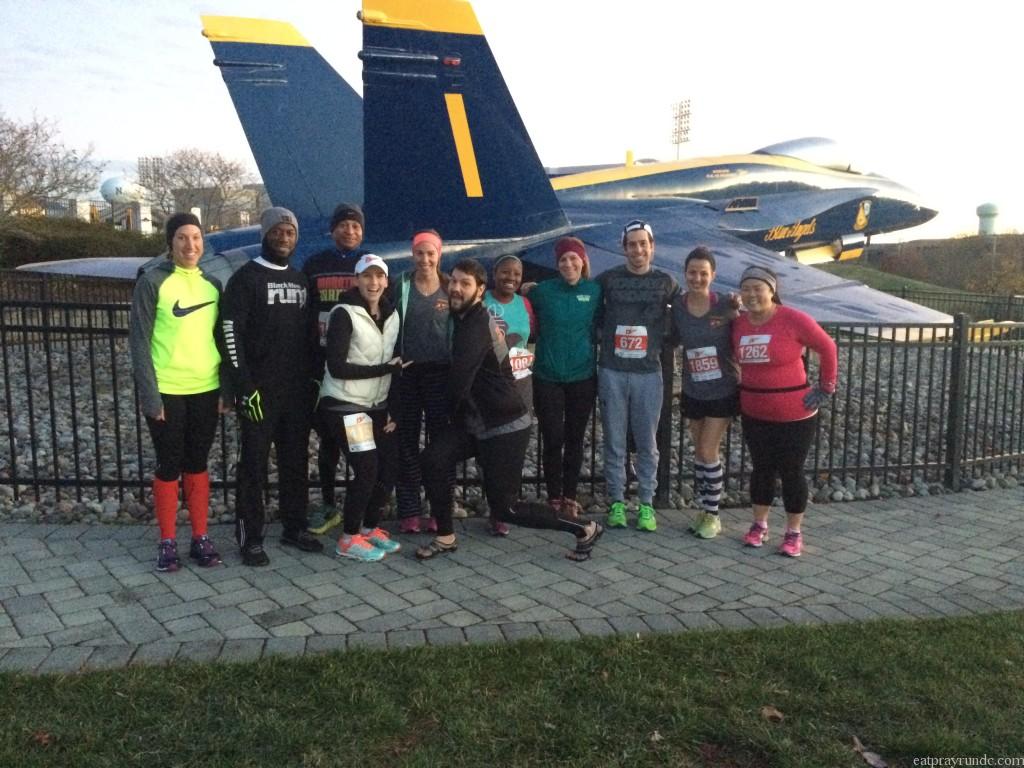 The race starts off at the Navy Memorial Stadium and then winds it’s way to downtown Annapolis. The downtown portion is my favorite of the course and it’s really pretty running close to the water through the streets of Annapolis. The race was medium sized and I never felt boxed in. Caitlin ran with me for about three miles before dropping back. Then I was on my own. I entertained myself by enjoying the views and looking for friends on the out and back portions of the course. I saw Lauren from Breathe Deeply & Smile rocking it and saw my friend Anne a couple times as well. 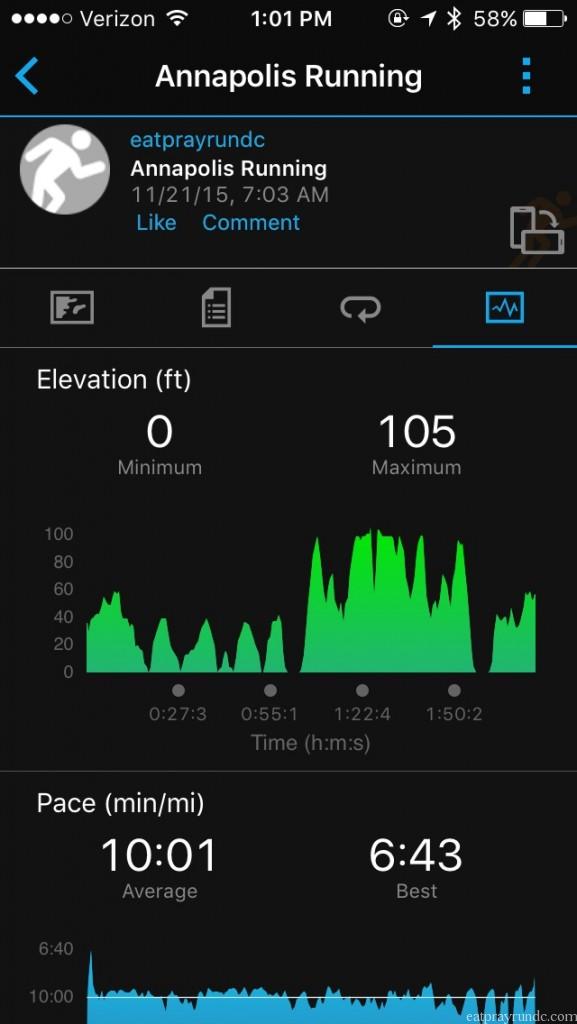 As you can see in the image above, the hills become pretty frequent halfway through the race. As I was trying to distract myself, something really cool happened. I wrote a fairly lengthy post about it on Instagram, so I’m just going to share that post here:

Today I got to do something really cool. I knew from reading Janelle’s blog that she was hoping to PR the half today. I was hoping I’d get to meet her & maybe see her on the course. Well, as luck would have it, I ran up on her around mile 8. We’d just come through a series of hills and she was tiring. I told her that we were going to finish this thing together. I told her that she could do it. I told her to stop listening to her brain because it’s a liar. I then told her she had two choices: she could either keep my pace or run ahead if she got tired of me talking. But she could not drop back. That wasn’t an option. We finished the race together – pushing hard the rest of the way. It was so cool to see her really go for it and to be a tiny part in her story. I’ve had so many incredible people help me push through tough miles – it was an honor to be able to pass on the runner love this morning. Congrats, Janelle. You earned it today! #stronger #better #faster #fitfluential #womensrunningcommunity #iloverunning #annapolisrunningclassic #runmd #runchat

It was the coolest experience to get to run with Janelle and help her finish strong. I felt really jazzed to have the chance to do something so many runners have done for me before! That experience is what running is about in my opinion. So great. We ended up crossing the finish line in 2:14:31 and I was happy with that. I wasn’t worried about my time at all (especially after I ran into Janelle) and I definitely finished with a smile on my face. A wonderful day all around!

What I wore: Oiselle Long Roga shorts, Oiselle wazzie wool long sleeve shirt, Oiselle singlet, Stance socks (which I love for short runs but I had a blister by the end of the race), Zensah calf sleeves (affiliate links) and Mizuno sneakers. I carried my Nathan handheld filled with Nuun.

Fueling: I drank water with Nuun in it during the race. I had two Huma gels in my pocket and I ate about half of one but didn’t love the lemonade flavor. I do think I should’ve fueled more at some point during the race, but I wasn’t hungry. I had a Picky Bar for breakfast and that worked well. However, just like the previous week at Richmond, once I crossed the finish line, I felt kind of woozy – probably due to the lack of calories. Thank goodness there was delicious tomato soup at the finisher’s tent. I had two servings it was so good!

I’m very happy to have successfully finished 20 races – and I’m not quite done yet. I’m running a Turkey Trot Five Miler Thanksgiving morning and maybe one more holiday themed race before the year is out.

Did you race this past weekend? If you ran the Annapolis Running Classic, link up your recap!