This was my fifth year in a row of racing the Cherry Blossom Ten Miler. I had honestly not realized this year was my fifth and so in honor of that, I thought it’d be fun to take a quick look back at my prior experiences. If you are just interested in the recap of this year’s race, scroll down! Looking back at 2013, my very first Cherry Blossom Ten Miler. I was so excited about the race and oh so nervous. I met a woman named Jamie while running and we ended up running the whole race together and becoming friends. My goal was to run sub-11 minute miles. I ran a 1:51:02 and was really proud of myself. 2013 was the year that I started to become more serious about running. In 2014, I ran a 1:42:35. My average pace was 10:16, which I felt happy with. I ran Cherry Blossom in 2014 one week after I’d run my first trail marathon (which is a whole other story). 2015 saw the race course get cut a bit short – there had been an accident the morning of the race, so the course was only 9.39 miles. However, the race gave everyone an estimated finish time based on their pace in the 9.39 miles and mine was 1:31:14. Finally, in 2016 I ran with a friend and was shooting for 1:30ish – I ran a 1:31:12. For my fifth Cherry Blossom, I thought that I should be able to PR pretty easily given that my PR was definitely not indicative of my fitness level. However, I knew that a week after a hard run half marathon, my legs might feel terrible. I decided that I’d definitely go for a PR and shoot to run around 1:25ish. I had a really solid day and ran a 1:23:43 – here’s how it shook out: 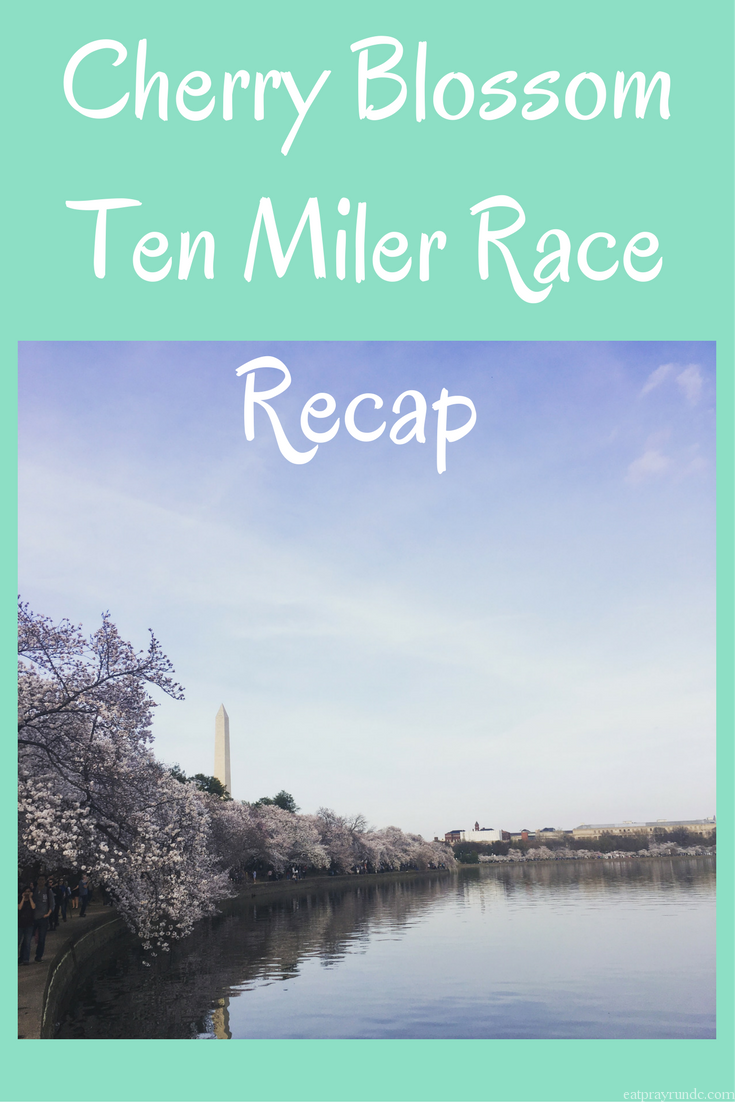 Miles 1-4 (8:09/8:17/8:23/8:24) So I had a genius new strategy this year – start at the very front of my corral to be able to have space to run in the start. As you can see, it worked. The gun went off, and it was like I was running alone for a few minutes. So much room! I actually started off way too fast since I had so much space, but oh what the heck. My good friend Jackie was right near the start and we got to take a quick picture before she went to go cheer some other friends. My other friend Liz was taking photos as well. Such fun!

Miles 5-8 (8:22/8:19/8:24/8:20) Five miles in and I was feeling pretty strong. I truly love the ten mile distance and felt like I was generally running with people around the same pace. Plus, there were still some cherry blossoms hanging on, which was so pleasant!

Miles 9-10 (8:20/8:11) I spotted my friend Bri and caught up and ran with her for about a mile and a half, which helped me get out of Haines Point, which is never my favorite. Then in the final stretch, I saw my Oiselle teammate Meghan and worked to catch up to her so we could finish together. We crossed at 1:23:43, an average pace of 8:22. 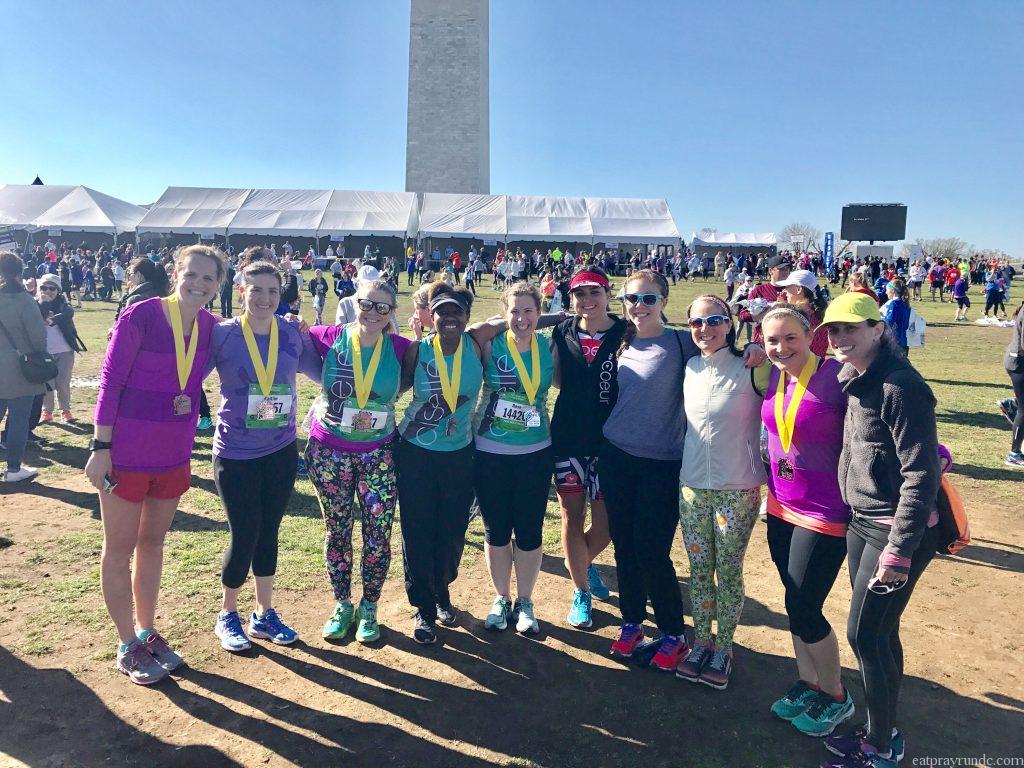 I’m really proud that I’ve been able to cut off 28 minutes off my ten miler time since 2013. I’ve had this conversation with a couple folks recently, but the reason I’m proud of my recent races isn’t because I think faster = better. Not at all. I’m proud because I am fully aware that I am just an everyday, average runner. I’ve been able to find a modicum of success with getting faster through learning more about running + working really hard. And that (the hard work) makes me proud. This is a topic for another day, but just wanted to put that out there.

Another really awesome part of this race weekend was getting to meet up with Jennifer from Dashing in Style. You might recall that Jennifer is who inspired me to even try the Hanson Method. We’ve followed each other for years and she came to race this weekend (she had a great race – go check out her recap!) and we knew we had to meet. We had a wonderful lunch, along with our mutual friend Anna and Jennifer’s friend Jamie. It was SO lovely to meet her and it felt like we’d known each other for years. Such such fun.

Have you ever run Cherry Blossom? If so, what’d you think??