I’m at the point in my training where I’m running a minimum of ten miles or more every weekend. Ten mile runs are done during my cutback weeks, and my mileage is creeping up just about every week. An increase in mileages comes with increased attention to fueling. I’m constantly experimenting to figure out what is right for me. I thought I’d share what I’ve been eating pre, post and during my longer runs lately. I plan on to continue to tweak this and use a version of this fueling plan all the way through Richmond in November! 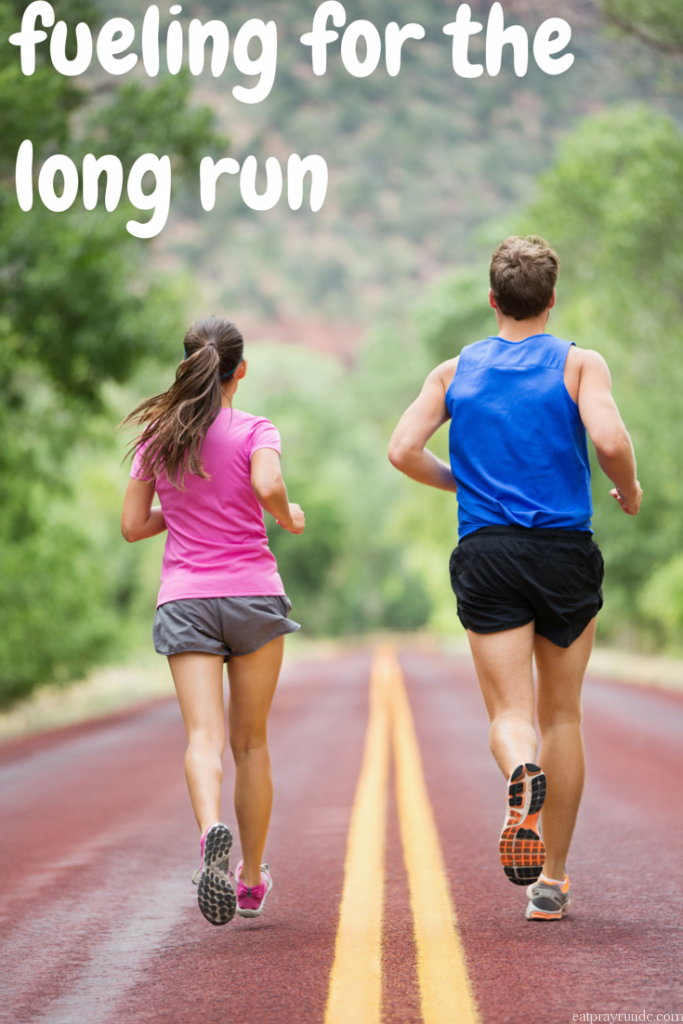 Pre Run
I’ve been experimenting with not eating before shorter runs. For now, I’m defining shorter runs as those runs that are less than ten miles. For me, that’s a bit under two hours of running. I’m trying to ensure that my body is burning fat, not muscle, when running those shorter distances. Just a note—this may not work for you and I’m not a doctor, nutritionist or exercise professional. This is just what is working for me.

For runs over ten miles, I prepare a piece of whole wheat bread with a some peanut butter to eat that before the run. I have a really hard time eating early in the morning before long runs, so I really have to force myself to do this. However, I know if I don’t, I’ll be reallllly hungry soon. I also do one half of an English muffin with a touch of honey and peanut butter. Sometimes this goes down easier than the piece of bread and I can eat more of it. I have no idea why it sometimes works better, but often it does!

On the Run
I’ve been eating Annie’s Organic Fruit Snacks during longer runs and I’m really happy with them. They are made with real fruit juice—nothing artificial. They keep me going and are tasty. I’ve also been taking a salt tab on longer runs. I’m not 100% sure that it’s working but I have felt like I’m losing fewer electrolytes. Of course that may be a placebo effect but I’ll take it! Less salt on my sweaty face is a win!

Post Run
I try to have carbs plus bacon soon after runs. Either oatmeal or some other kind of cereal with a side of bacon usually gets me feeling better right away. I keep it pretty simple post run and that works for me.

What do you eat pre, post and during your runs??

A version of this post originally appeared on Women’s Running magazine.