Editor’s note: I am off on my honeymoon and have some amazing guest posts lined up for you guys. Today, Erika from MCM Mama Runs is sharing five things learned from 20 years of marriage. Oh, how appropriate this is as I approach 6 months of marriage. 🙂

Courtney is off enjoying her honeymoon (yeah, I’m a bit jealous), so she’s asked me to fill in for her today. Since I’ve been married for almost 20 years (I was totally a child bride *wink*), I thought I’d share the perspective of someone who’s been traveling the road for a while. I’m very lucky that I made an excellent choice in husband and that our marriage has been strong from the beginning. I’m also lucky that my parents have been happily married for 45 years. Over those years, I’ve learned a few things. 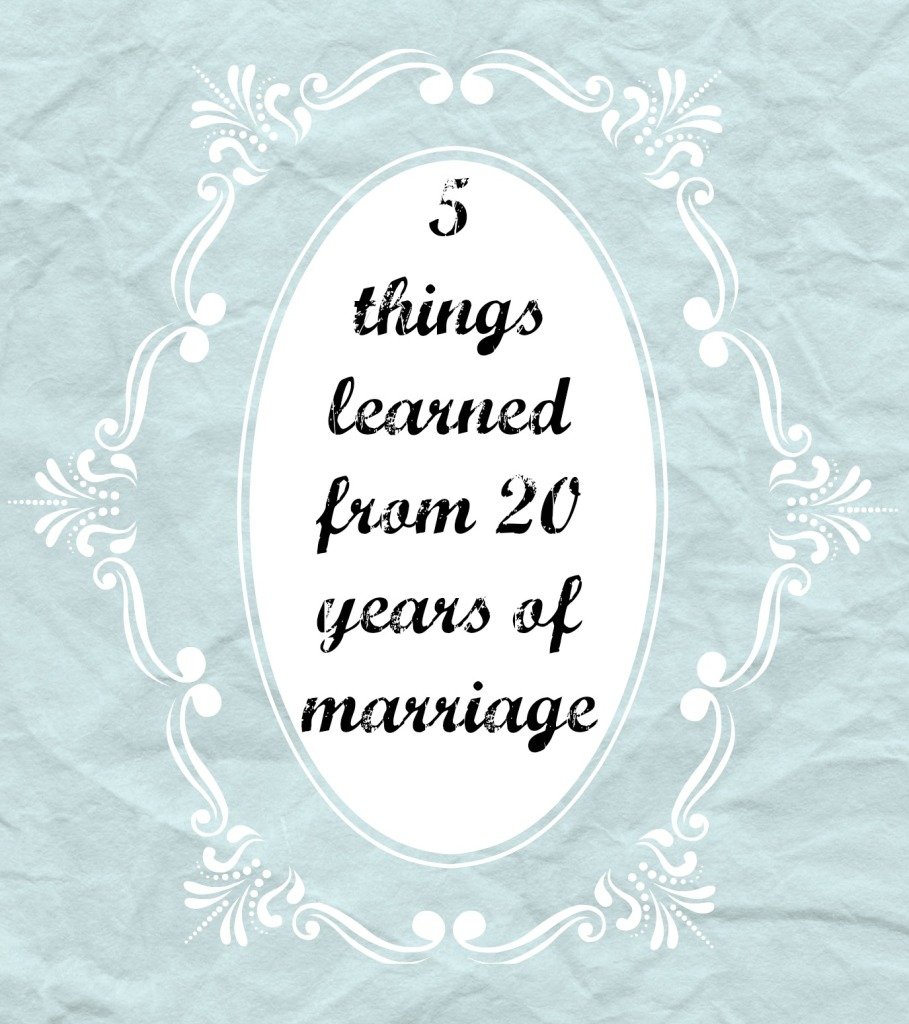 1.Marriage is not easy. If it were, the divorce rate wouldn’t be so high. Marriage takes work. Make the time to stay connected with your spouse, no matter how busy your lives are, no matter how demanding your children are, no matter what other things are going on in your lives. Putting in the effort along the way is a whole lot easier than trying to put things back together once they’ve started to fall apart.

2. There are things about your spouse that will drive you batshit crazy. Seriously. You can’t live with someone for 20 years and not have pet peeves. I’m am also 100% sure I do things that drive him crazy too (I could probably even list the top 5 things I do that annoy him, but I do them anyways because they are part of who I am.) It’s near impossible to change a person, so focus on changing your response. Remember to not sweat the small stuff. And most of it is small stuff.

3. Sometimes you do have to go to bed angry. Not every problem has an immediate resolution. Sometimes you are so emotionally invested in your viewpoint that you can’t see the other side. Take a step back and take some time to calm down. Often, after both have had the time to ponder an issue, a compromise can be found or it will become clear that one path makes the most sense.

4. Every relationship will go through rough patches. Even the most compatible couple will have times when married life is rough. Outside stressors can make things seem rocky. But a rough patch does not a bad marriage make. In fact, rough patches handled well make a marriage stronger.

5. There are no winners or losers. Our society is a competitive one. Everyone wants to be right. That doesn’t work in marriage. If you need to prove you are “right” or always get the outcome you want, your significant other comes out as a loser. Instead of that mindset, look for the best path for your family unit. Find the compromise that you can both live with.

Marriage is an amazing thing. Being with someone who has seen you at your worst and loves you and accepts you anyways is one of the greatest experiences ever. I wish Courtney and her husband a wonderful honeymoon and many, many years of togetherness.

Erika, the mom behind the blog MCM Mama Runs, first began running to combat postpartum depression. What started as a few times a week, 30 minute commitment soon led to a half marathon and then her first full marathon. 2 full marathons, 34 half marathons, and a ton of other races later, Erika is well on her way to running a race in all 50 states. Join her on her blog where she talks about training and racing while trying to balance work, kids, pets, and her love of craft beer. Follow Erika on twitter, facebook, instagram, or bloglovin!