Recently before I fell asleep, I was thinking about how I haven’t actually watched an episode of The Walking Dead in a couple months. I realized that although I didn’t do it on purpose, I was slowly giving up The Walking Dead – one of my favorite shows. Read on to see why. NOTE: This post will contain spoilers on the first half of season 6 of The Walking Dead. If you’d like to avoid said spoilers, do not keep reading. 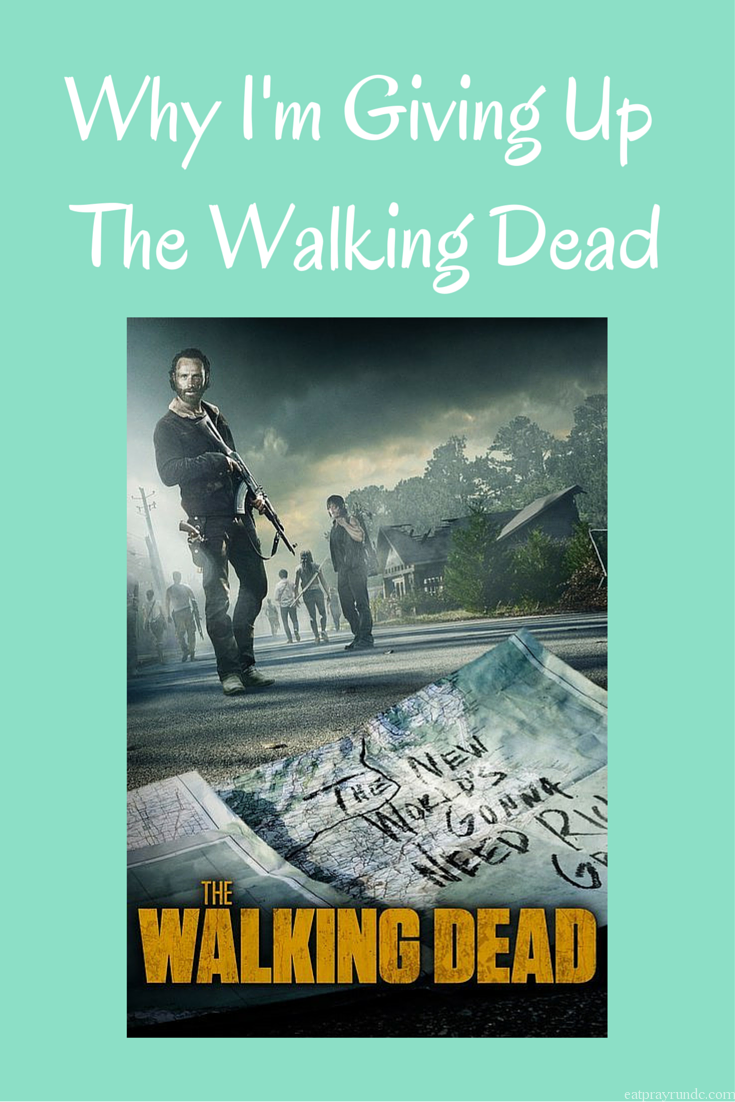 In case you have lived under a rock for the past few years, The Walking Dead is one of the top cable television shows and has been for awhile. It tells the post apocalyptic tale of survivors of a mysterious virus that has affected all of humanity – when one dies they “turn” into a terrible, people-eating zombie (called “walkers” by many of the characters – hence the title). It’s intense, engaging and often terrifying. I’ve been a big fan of the show for years and have loved watching every twist and turn.  So why am I now giving up The Walking Dead? Well, in short, the show has done it’s job too well. It’s been too intense and too engaging.

I’ve gotten so entangled with the characters and so involved with the storylines that I have had a hard time being able to deal with the ever increasing violence on the show. Of course, if you watch, you know that the show has always been violent. What got me this fall is that I found I keep thinking about the show long after I finished watching episodes and it was starting to bring me down. It sounds so ridiculous, but it happened. Okay (and again, spoilers are coming so stop reading if you don’t want to read them), for example, in the third episode of the current season one of the main characters (a great guy named Glenn) appeared to be in a situation that he would not be able to make it out of alive. The audience’s last shot of Glenn was him laying on the ground with a dead body on top of him and hundreds of walkers surrounding and pawing at him while he screamed. It was horrifying and a terrible lasting image.

And I found that I just couldn’t shake it. I was so bummed about what I’d watched on screen that I just couldn’t bring myself to watch the next week or the week after that or the week after that. Before I knew it, I was more than a month behind and just didn’t have a desire to go back and watch to see what happened. Of course, I was still curious about what happened to my favorite characters and luckily I could find out without having to watch the show. There are so many recaps of The Walking Dead and so I’ve been able to stay up to date without having to get super involved.

I know, it sounds weird, but honestly I just don’t think I want to watch all the violence and death and gore that takes place on The Walking Dead anymore. Not because I’m categorically against that stuff but because it started to bum me out to see bad stuff happen to characters I liked. And because it’s The Walking Dead, it’s only going to get worse. So, for now at least, I’m giving up The Walking Dead (at least giving up watching it, I’ll still read recaps).

Is there a show you’ve had to give up for similar reasons?