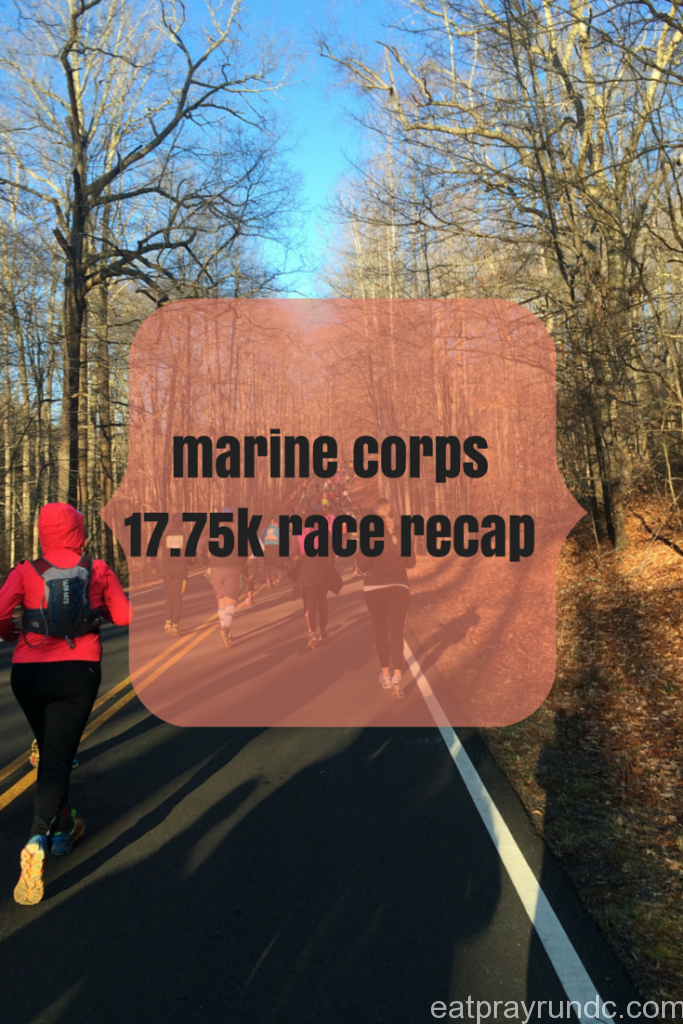 Since the race takes place in Dumfries, VA, Mar had suggested we might want to think about a hotel the night before since getting out there from DC can be time consuming with all the ridiculous traffic. I said sure and then realized I had a free night’s stay so booked a local Hilton property (a super nice and comfy Hampton Inn) while Mar chose a different hotel. We met up for a fun dinner at Ruby Tuesday’s (hello, suburbs) and I was back in my hotel to relax by 9pm. The race started early – 7am and so Mar and I met up about 6:15 to be shuttled to the race start (FYI – there is NO parking at the race start but you can avoid the shuttle if you have someone who can drop you off and pick you up). The shuttle were super warm coach buses and because it was about 25 degrees outside I was in no rush to get off the bus, but we had to. We were so fortunate that Montclair Tabernacle Church (which is on the property where the race began and ended) opened their doors to the runners. It was super gracious and I was certainly thanking Jesus for an opportunity for real bathrooms and warm temperatures. Thank you again, Montclair Tabernacle for opening up your home to us! 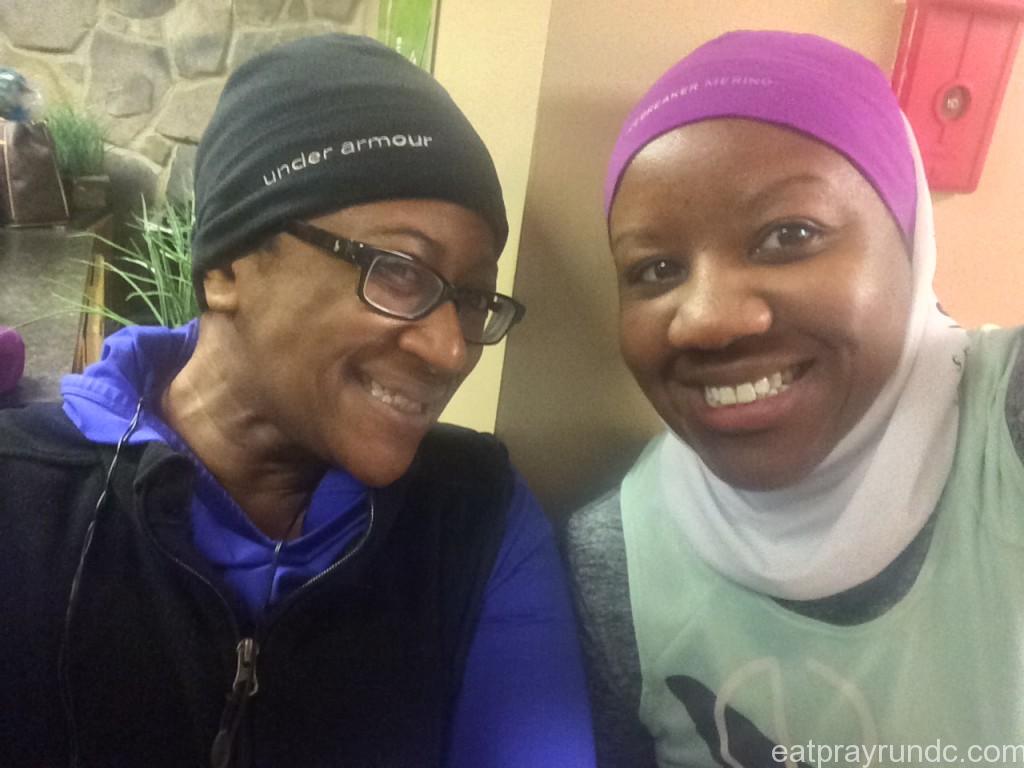 I know I look a bit like a crazy person but I was trying to cover as much skin as possible – it was SO cold!!

The only negative to us being inside is that we waited to go outside until the race had actually started. This meant that we started in the very very back of the pack, which can sometimes be stressful if you are typically a middle of the packer like myself. The race quickly turned off the road into the park and I knew that the first few miles would be gravel and trail. Well, what I did not know (but should’ve suspected) was that the first few miles would also be pretty much a single track. There was basically no way to get around the crowds and there were a number of folks walking from the start. I had no right to complain because I’d waited and started in the back but I knew that if I stayed behind all those folks I would never be able to get a groove going. So I did my best to weave around people and run alongside of the trail to pass folks. It was rocky and gravelly and muddy at parts as well. The first couple miles were spent dodging huge patches of mud and people walking (Miles 1-3 11:29, 11:58, 11:12). 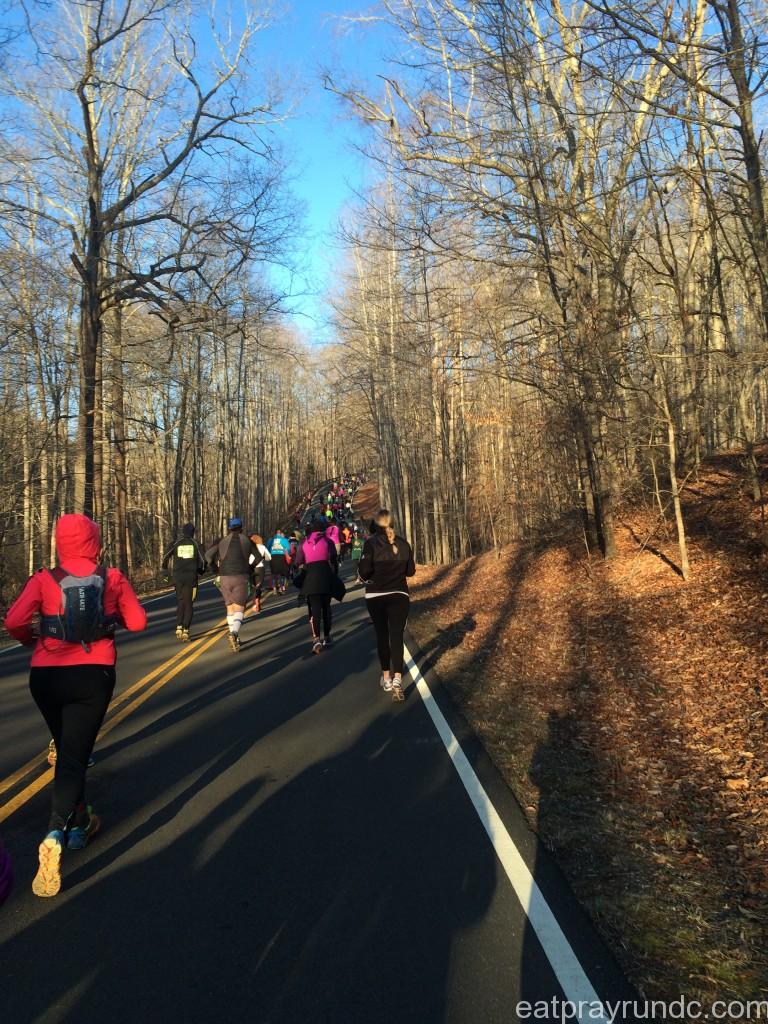 the hill curved right at the top and continued. it was not awesome

Finally after about three and a half miles we moved onto the road and I was able to gain some space and some speed along with that space. Until we hit the giant hill I’d been warned about. I did manage to run up the hill but my run was basically a quick walk because that thing was steeeeeeeep! Following the big hill, the course was rolling with gentle inclines and teeny little declines that I never really felt. I was however, able to pick up the pace and since we were back on the road, I kept getting faster each mile. I tried to push hard while we were in this stretch because I knew the final miles of the race would take us back on to the gravel and mud and I also knew that there were some brutal hills coming in the final miles (Miles 4-9 10:24, 11:29 [the huge hill, clearly], 10:57, 10:48, 10:31, 10:27).

Then mile ten came. Mile ten brought a hill that while it wasn’t terribly long, it was pretty steep. I remember when we ran down it in the second mile, I knew it’d be bad coming back. And it was. I had to stop and walk about halfway up the hill. It was brutal and I was so excited to be almost done. Finally, we headed out of the forest, back on the straight road towards the finish (Miles 10-11 11:57 [hill of death], 10:50, 9:02 [.01]). I was SO happy to be finished and to have earned the right to run the Marine Corps Marathon. 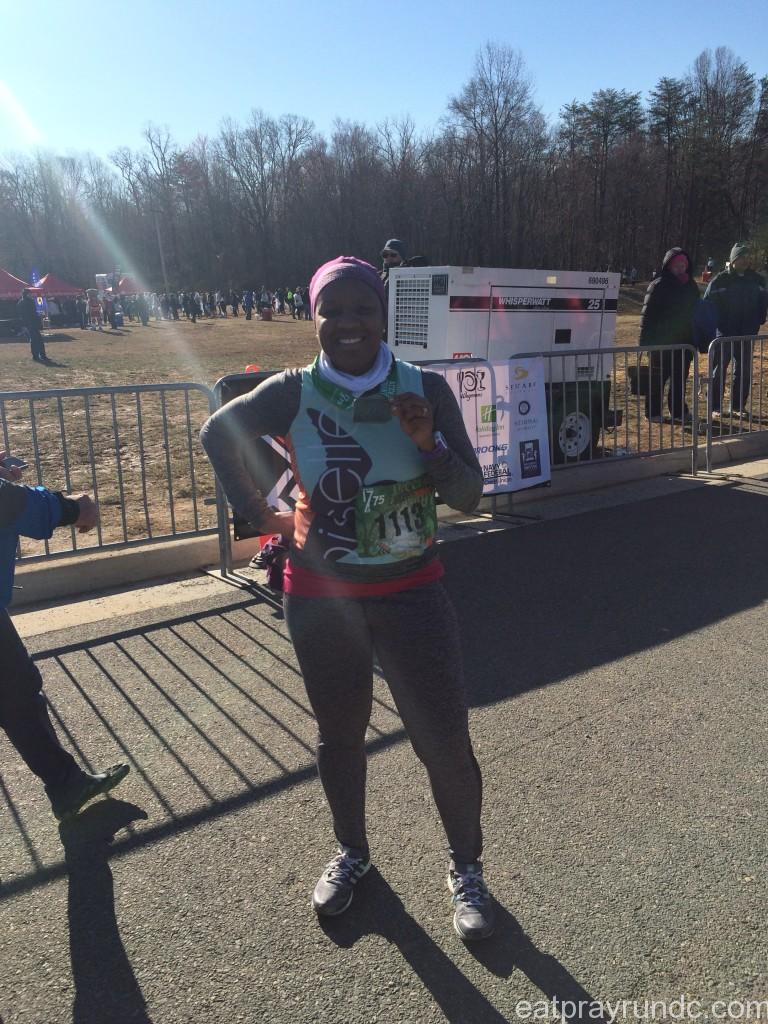 Mar and I had agreed that if we got separated we would not wait for the other one at the finish – it was just too cold for that. I did try and wait just a few minutes for her, but quickly got too cold so I breezed over to get on the shuttle back to where my car was parked. The return shuttle was pretty easy – I know some folks on later shuttles had issues and had to stand and such, but I didn’t have any problems. I was so happy to be back at my hotel and quickly grabbed a small cup of oatmeal because I was pretty hungry since I skipped all the post race food in lieu of hopping on the shuttle right away. After cleaning up and checking out, Mar and I met up for a post race breakfast at Cracker Barrel and it was delightful! I’m so happy I earned my access to MCM and SO happy that race is done. It was definitely one of the hardest races I’ve done (not harder than my first trail marathon but still pretty freaking hard) and I’m not sure that I would do it again. Not because it’s hard, but because the logistics involved are kinda a pain. If there was packet pickup closer to DC, then I might do this one again! 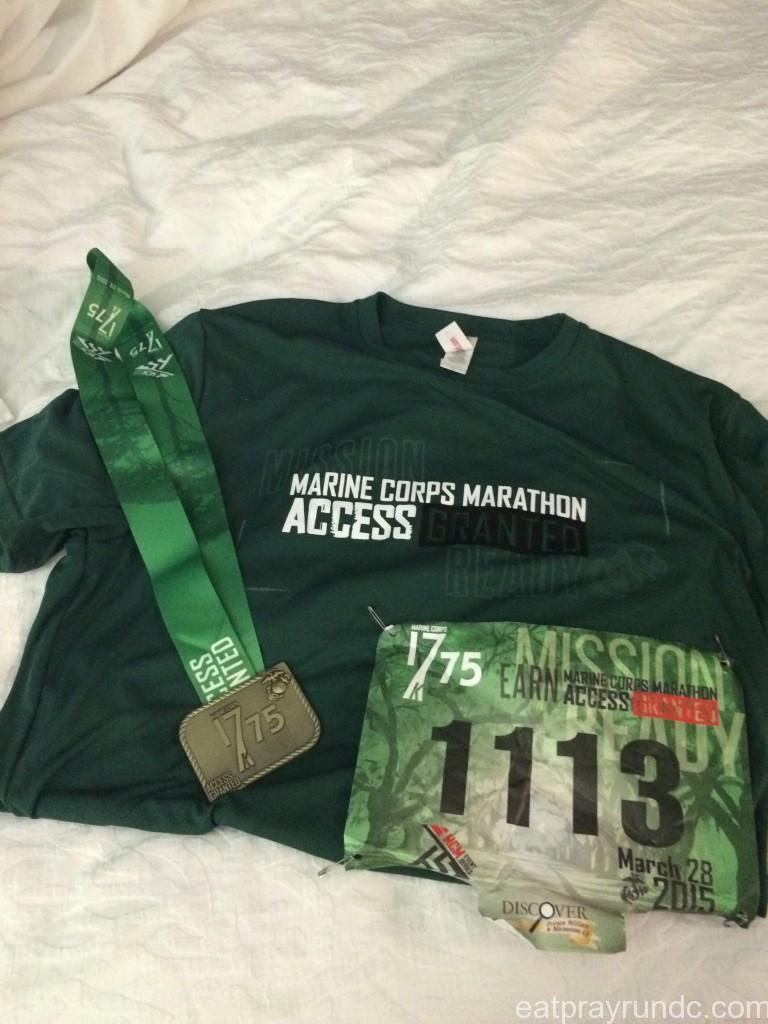