This year celebrated the 40th anniversary of the Marine Corps Marathon. I was thrilled when I got into the Marine Corps 17.75k earlier this year because I knew that if I finished that race, I would earn the right to run the MCM, my home marathon. I’d been looking forward to this race for months and it many ways it was incredible. In other ways…there was something left to be desired. I’ve been writing and re-writing this recap in my head for the past few days, but let’s just get on with it. Settle in…this Marine Corps Marathon Race Recap ain’t short (seriously…it’s kinda long – you’ve been warned)! 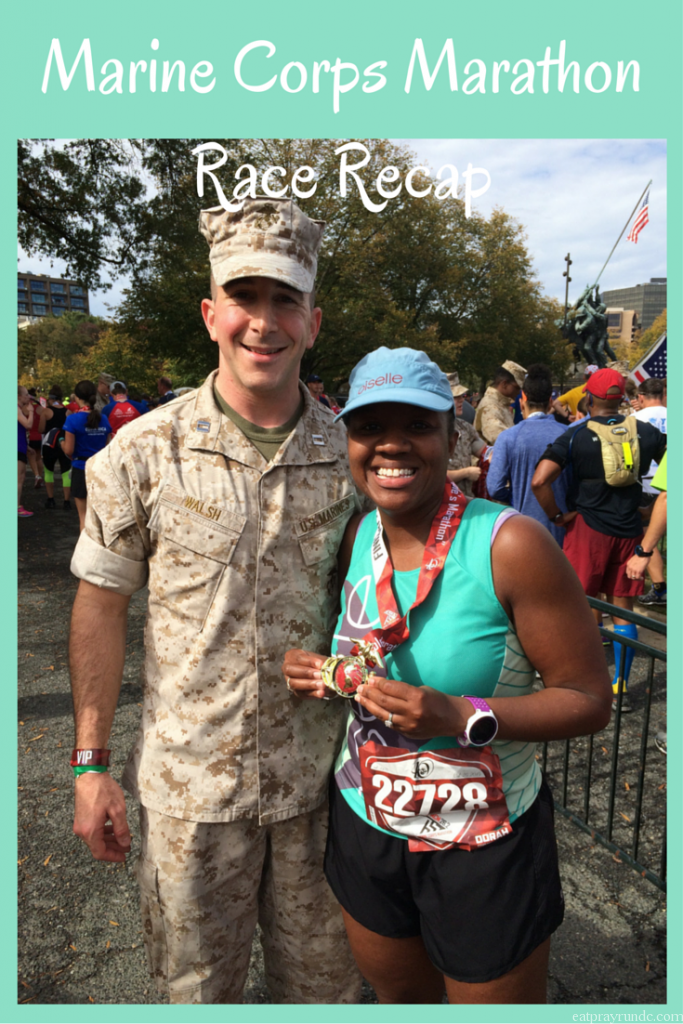 You might recall that my goals for the race were: A) 4:30; B) 4:31-4:51; C) sub-5. I knew my A goal would be a stretch but thought a PR was well within reach (that was basically my B goal). As it turned out, I came in just about one minute slower than my B goal. For a variety of reasons that I’ll discuss it was not my day race wise, but it was still a great day! After a fun Saturday of lunching and a shake out run with my Oiselle gals, I was feeling ready for race day. Julie and Caitlin had driven up from NC to cheer and we enjoyed a lazy day of college football and food. 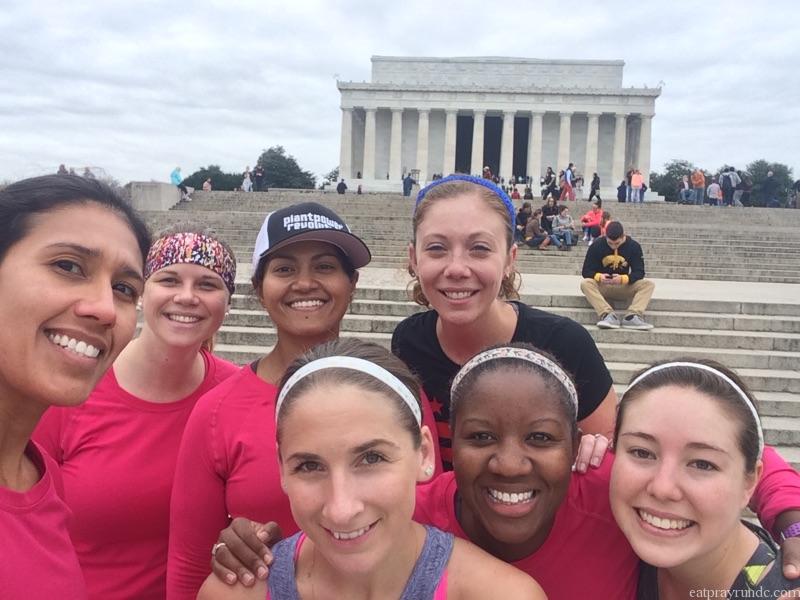 Race day dawned warm and rainy, which was somewhat consistent with the forecast. I asked Julie and Caitlin to bring my hat in case the rain continued during the race, since I would first see them around mile 5.5. Once I got over to the Pentagon, I was treated with an outrageous line for security. I (along with thousands and thousands of others) waited for almost an hour. The race had actually already started by the time I got through security. I’ve heard that the problem was that the medal detectors didn’t work in the rain…and it was raining. This is kind of ridiculous in my opinion – no one foresaw this being an issue?

Anyway, the security snafu led to an extremely stressful start. By the time they started letting more people into the gates, I had to rush over to drop my bag and then find my training friends. They were kind enough to wait for me (they went into the race on the Rosslyn side where the lines were much shorter) before starting the race. This was definitely not how I planned to start marathon number 6, but you can only control what you can control, right? 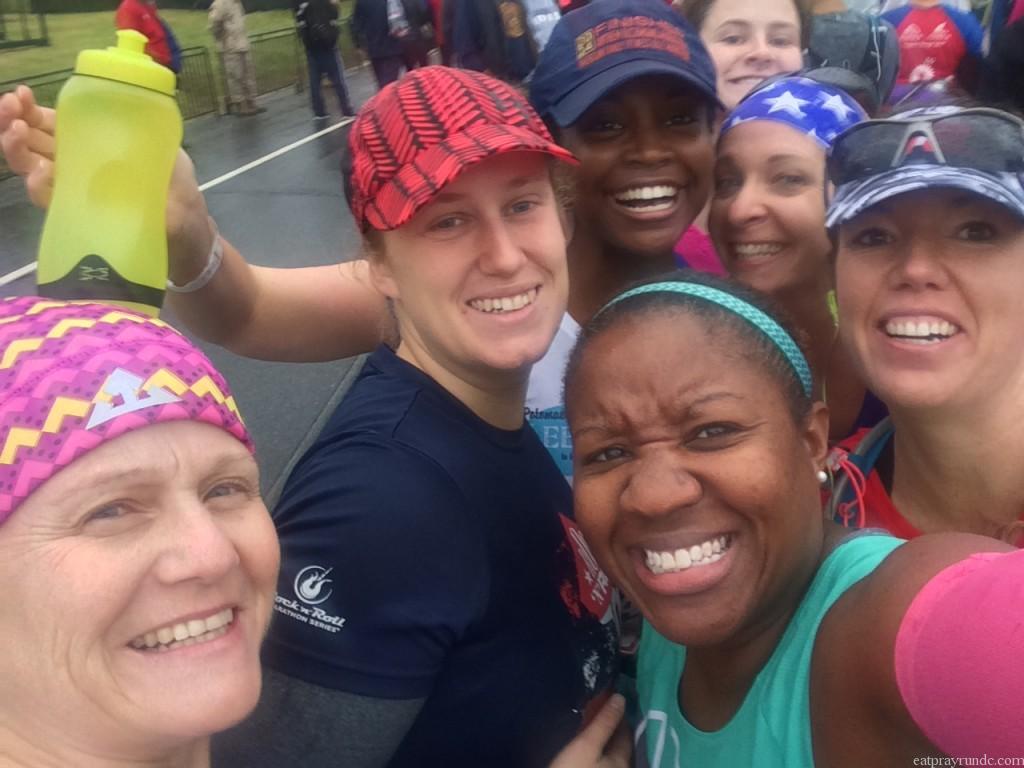 And so, we were off. Almost instantly, my group broke off into two groups. I was with my friends Deb and Christina and off we went. As you can see below, the course is mostly flat with a hill in the first couple miles, but then relatively flat after that with a small incline going up to the 14th Street Bridge and of course, the final .2 miles.

Miles 1-6.2: The race was so crowded. We started very far back (about 18 minutes after the race officially started because I was delayed) and it was just jam packed. I was constantly weaving between walls of folks and knew that all the weaving would come back to bite me in the butt. We passed the 5 hour pacer at some point during these miles. It was also still raining, so the road was slick and I was trying to be very careful not to fall. I saw Joyce and Becca of the Oiselle team at mile 2 (right in the middle of that hill) and that was awesome. Then I saw Julie and Caitlin at mile 5.5 and was able to get my hat from them since the weather was gross. Luckily, it stopped raining somewhere around these time. Unluckily, the humidity (around 90%) then became very apparent. (10:47, 11:19, 10:16, 10:23, 10:22, 10:04)

Miles 6.2-13.1: As was the theme for the day, the race continued to be crazy crowded and we lost some time trying to find Deb after losing her at a water stop. We ended up running into her about a mile later so all was well. I got to see Prianka from the team during these miles and that was fantastic. We came upon the blue mile with the pictures of fallen soldiers and I teared up as I was running. I’m a military brat and was really really moved during this mile. The rest of Haines Point was terrible because I lost both Deb and Christina. Deb was a bit behind me and Christina needed to pull back. While I’m very used to running races and marathons alone, I was really looking forward to running with my girls at least until mile 20 and when I found myself alone at mile 12.5, I was really distraught. I was also starting to get tired, which is a very bad thing 12 miles into a marathon. In retrospect, I think I should’ve started taking Gatorade at this point. It was warm and humid and I think I was rapidly becoming dehydrated. Hindsight, right? I crossed the halfway mark in 2:18, which was on target for a 4:36ish finish. Of course, that was not how the day turned out. (11:03, 10:04, 10:14, 10:03, 10:33, 10:20, 10:25)

Miles 13.1-20: The only thing I really remember during these miles are all the times I spotted friends. Julie and Caitlin were at mile 15.5 and so I got company for about a mile. I told them I was tired and lonely. I’m sure I was pretty pitiful because I really was just lonely at that point. At mile 17, I saw a couple of friends from my training group and gave them a huge hug, which was awesome. Then at mile 18, my husband was waiting for me. Another huge hug and it pumped me up! I keep going around the Capitol and then around mile 19 ran into another friend from my training group who was having a rough day. Shortly after that, my friend Laura from law school was there and I was able to say hi. Seriously, these miles were full of friends and that was a great distraction for what was to come – the awful bridge.  (10:30, 10:31, 10:36, 10:56, 10:59, 10:35, 11:41)

Miles 20-26.2 (or 26.61 according to my watch):  Ah. Well, the bridge. There’s not much to say other than it’s long and it sucked. It was so much harder than it was when I ran it during the Army Ten Miler two weeks prior. Of course I knew that would be the case but dang. On a positive note, I ran into another Oiselle teammate, Kelly, on the bridge and she basically got me over it. I really was not feeling it but chatting with Kelly helped so much! And then after the bridge, I came around the corner to see the Oiselle Cowbell Corner set up. It was maybe the BEST.THING.EVER. This is how I felt at mile 22 upon seeing my Oiselle gals: 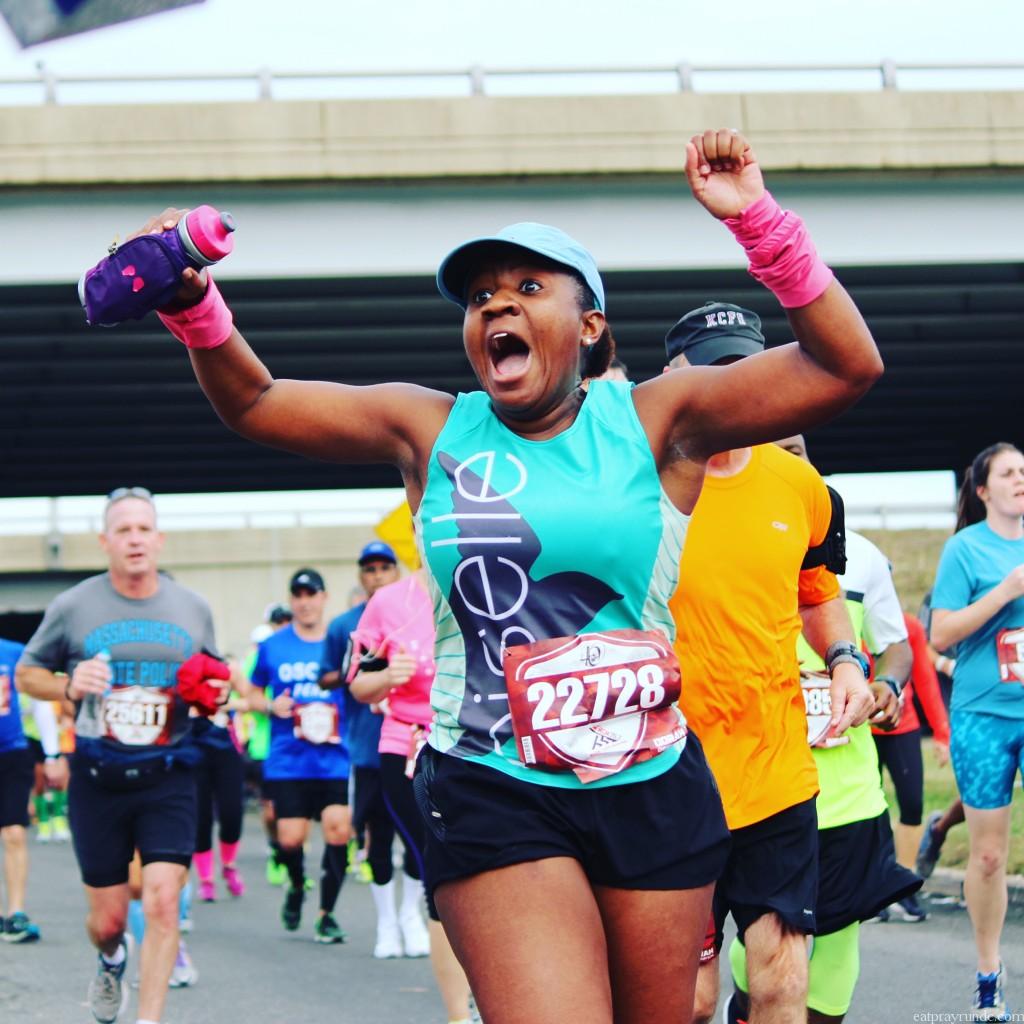 Yeah, basically. I was so wiped after that bridge that seeing my girls just gave me life. My one disappointment was that Julie and Caitlin weren’t there. Well, not to fear, because I quickly saw them about five minutes later. And then, those sweet sweet girls literally ran with me the rest of the race. First Julie ran me a mile and then Caitlin ran the last three miles of the race with me. I can’t even say how much this meant to me. I was tired, my thighs were cramping like whoa and I was feeling really desperate for company. I got it and I will be eternally grateful. I honestly don’t know if I could’ve finished under five hours without the push from both of them. They were the most incredible support crew. #friendship.  I also got a hug from Coco from Got 2 Run 4 Me at mile 22.5 and that was fantastic! Finally, we approached the Iwo Jima Memorial and the finish. Now, let me say something about that final hill. I have run that thing probably ten times this summer in training. It felt SO different and SO much harder during the race. It was brutal. But…I made it! (12:03, 11:55, 12:28, 12:20, 12:37, 11:54, 11:21). I crossed the finish in 4:52:06, just short of a PR. 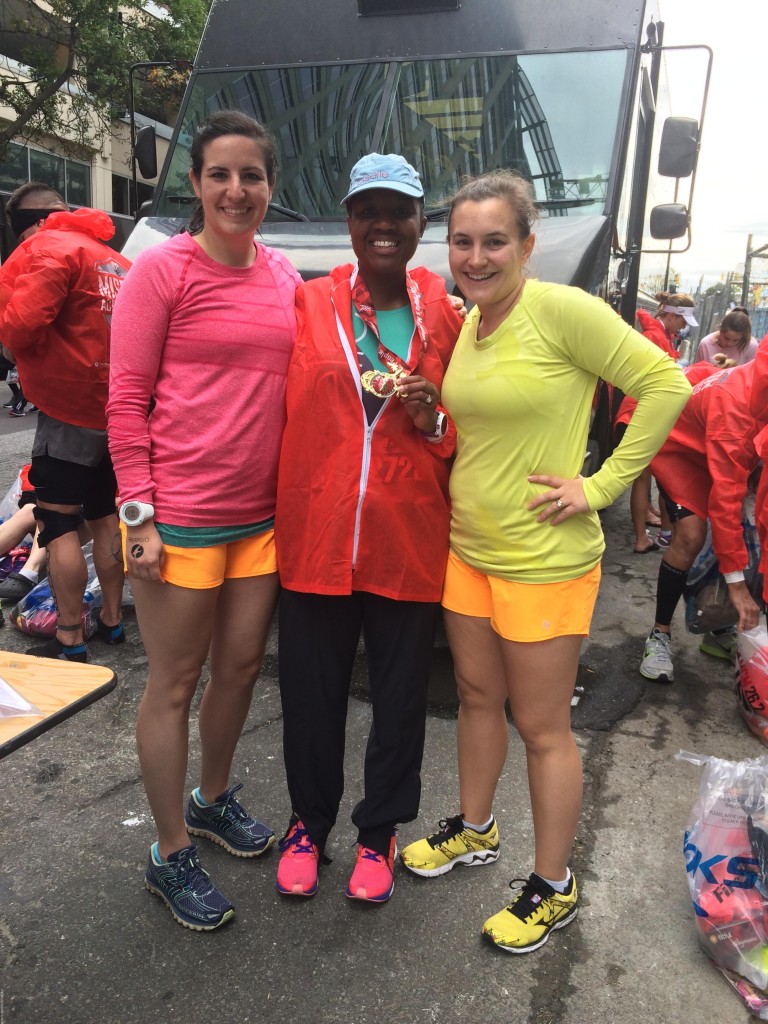 I also have to shout out my girl Mar. She ran the 10k, then went and hung out with the Oiselle crew to cheer. I gave her a huge hug at mile 22 and then she waited and found me after the race. It was extra nice because I did the same for her when she ran MCM last year. #friendship (and no, I don’t know why my hat was all askew in these pictures. I mean, the race was rough, y’all.) 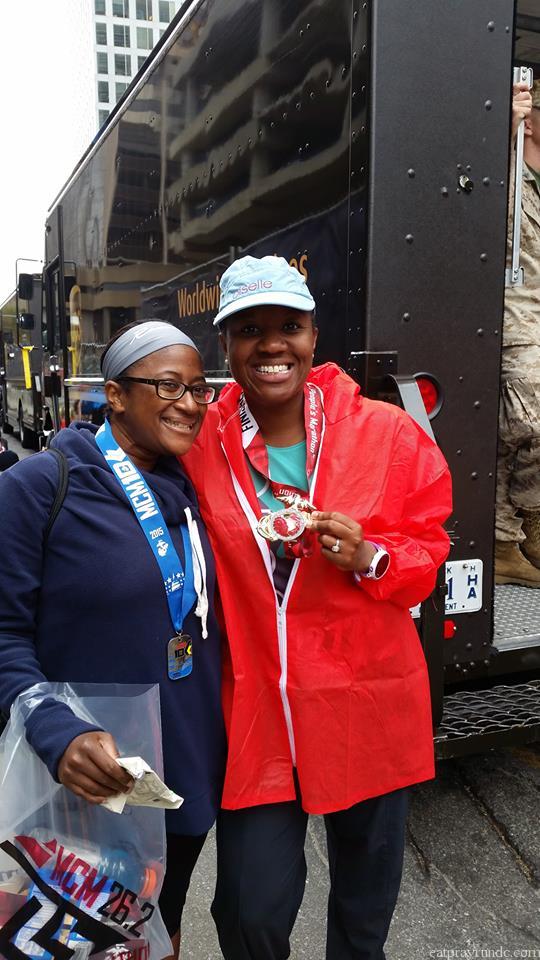 What I wore: Oiselle Distance shorts, Oiselle singlet, Oiselle arm warmers, Injinji socks, Zensah calf sleeves and (not pictured) Adidas Boost Glide sneakers. I carried my Nathan handheld and had my phone in my back pocket of my shorts.  Same as Wineglass – just with different colored shorts. 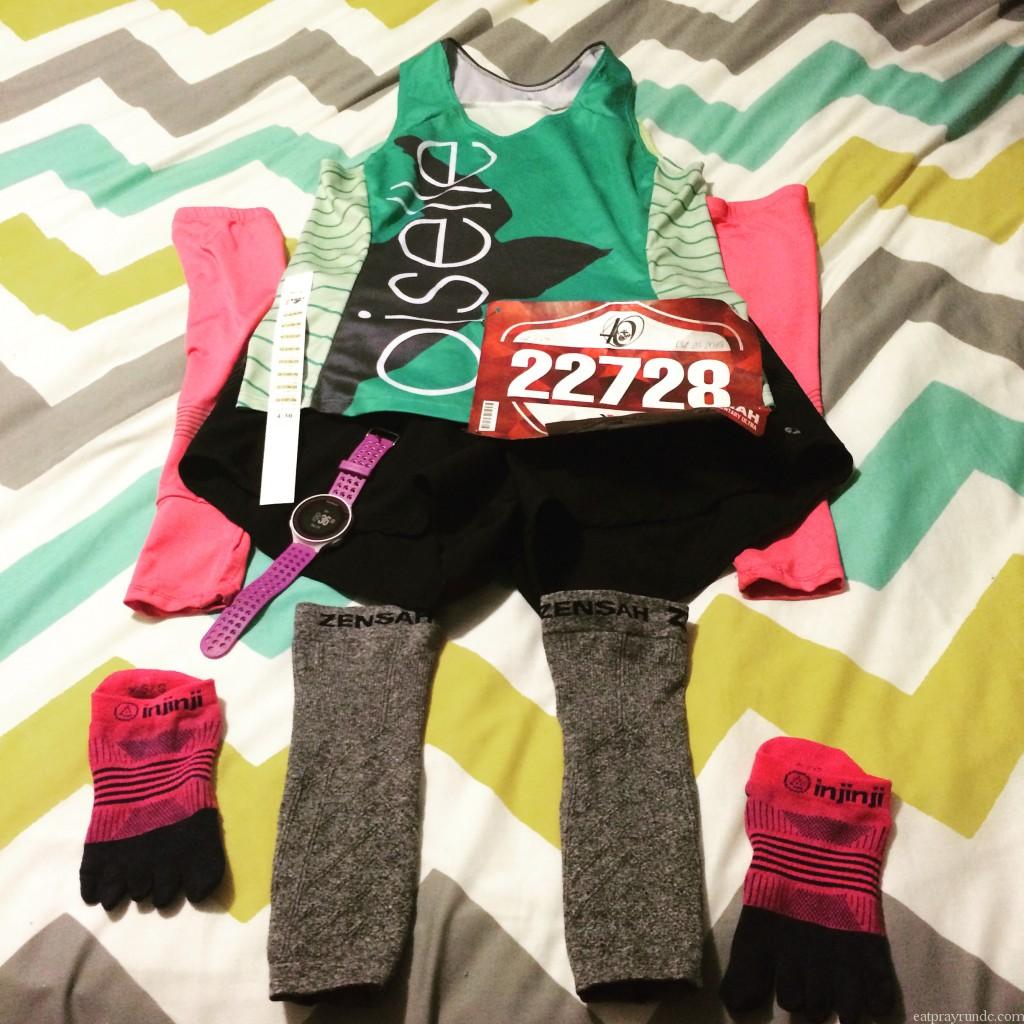 Fueling: I used the same strategy as Wineglass and ate a peanut butter and jelly sandwich before then race and then I drank water with Nuun in it for the first couple hours. Around mile sixteen, I started taking Gatorade when it was offered and stopped and had volunteers fill my bottle with water a couple of times. I took four salt sticks while running (on the hour mark) and ate a few pretzel sticks and gummies. I also ate sports beans that were offered at about mile 19 and 1 Dunkin Donuts Munchkin at mile 24. It was glorious. Unfortunately, as I mentioned, I did experience cramping during this race and I think I waited too long to start taking Gatorade.

Final thoughts: I absolutely loved seeing so many friends on this course. I’ve never had the type of course support I had at this race and it was simply amazing. I’m so grateful to all my friends and Oiselle teammates. However. I did not love the race. The hectic start, the crowded course and the lack of organization at both the start and the finish turned me off. I also hated running the bridge and the finish is just cruel, haha. I’m not sure if I want to run this again to show this course who’s boss or if I never EVER want to run it again because it kicked my butt. I think that if this was a first marathon, it might be great. I also think that if you don’t live in DC, it would probably be incredible. Since I train here, the National Mall and the Monuments weren’t a distraction from pain. It honestly felt like a normal Saturday running except I wasn’t with my group of girls (after mile 12.5). So I think I would recommend this to a first timer (there were a TON of them) or to someone from out of town. It is special to run among monuments for sure. But if you train in DC, it’s not quite special enough to distract from marathon pain. 🙂

I definitely have thought that but for the crowding, the late start, etc, I could have PRed the race. My watch (and the watches of many others) recorded 26.61 miles which is a HECK of a lot of weaving. But playing the coulda woulda shoulda game is never helpful and it doesn’t matter anyway. I’m proud that after trying to come in under five hours for two years, I was finally able to do it twice in one month. I am looking forward to choosing my next marathon and training plan.

Up next for me: Richmond Half Marathon and the Annapolis Running Classic Half Marathon (come run with me – use code CCREF15 to save 10%).

Did you race the Marine Corps Marathon this year? If you’ve run it, would you do it again?