Yes, this is a marathon recap (the NCR Trail Marathon Recap, to be exact). Yes, I ran a marathon two weeks after running Richmond. Yes, it was a trail marathon. Yes, two marathons in 14 days means I’m now a Marathon Maniac. And yes, I know I said I would NEVER run another trail marathon. Turns out I lied to myself! Here’s the story… 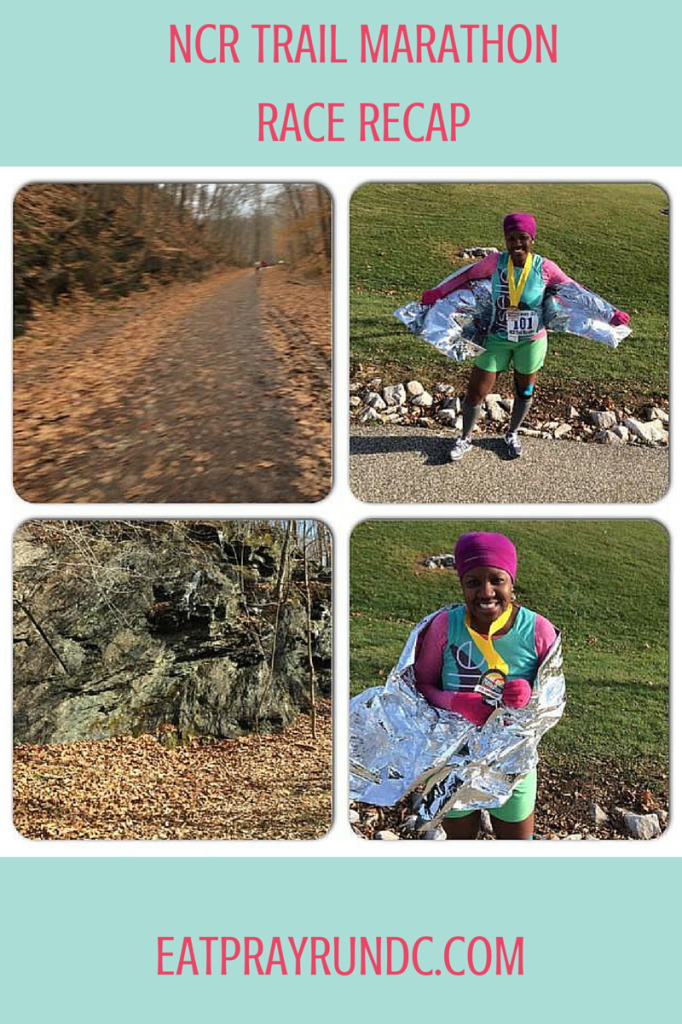 After Richmond, I was really torn. I loved (seriously, LOVED) running with my husband and crossing the finish line with him was something I will always remember. But, I felt impatient. I KNEW I was a better runner than a year ago and my marathon time didn’t show it. I know that the cramps I experienced in Richmond were just one of those things and I’ll never really know why they occurred (although I do have my suspicions) and that I had to just chalk it up to one of those things. But I wanted another go at it. I wanted to try again. I didn’t want to wait for another training cycle to have another date with the marathon. So as I’m apt to do, I searched for upcoming marathons and found the NCR Trail Marathon – the Northern Central Rail Trail Marathon- in Sparks, MD (just about an hour from me outside Baltimore).

Since I was running another 26.2 just 14 days after Richmond, I came up with just two goals: my A goal was to come in sub 5. My B goal was to PR. That was it – no other goals, just getting the job done. I knew the cold and the trail element (even though the trail was flat, it’s not as smooth as a road) would add some time, but I thought I just might be able to hit both goals if all went well. I came in just over 5 hours (and I stopped to use the bathroom, which added about two minutes, plus a few walking breaks) and feel FANTASTIC about that. I PR’ed by about 21 minutes, which I’m pretty proud of.

Miles 7-12 (10:40, 11:06, 10:55, 11:13, 11:23, 10:48) I lost Andrea somewhere around mile 7 or 8 (I felt good so pushed on and did see her again after the turnaround) and was running with a few different people around me. I felt strong and like I would definitely have a decent day, as long as I could just keep going at the pace I was running. The trail got a little loose at this point and you had to watch for footing, which I didn’t love. However, I knew I’d see K at mile 11ish so I was looking forward to that. There were a few points (coinciding with aid stations / water stops) where spectators could drive, hop out of their car and cheer you on. I met K at one of these, stopped to tell him I felt good, take a shot blok and then kept it moving. I told him to go to the mile 21 aid station / water stop next and that I’d see  him there.

Miles 19-24 (11:54, 11:33, 11:54, 12:48, 12:44, 12:23) After splitting with Brita, I had a bathroom stop and knew I wouldn’t quite catch her again (she finished 4 minutes before I did) so settled in to run alone. I was starting to really fatigue as you can see and I started to question why I did this. I wasn’t cramping or anything (thank goodness!), but I just hurt. I just kept telling myself to make it to 21. Finally, I did and saw K again – I was happy to see him but not happy when he complained about the cold. I’m pretty sure I gave him quite the “are you serious?” face. After leaving K, I pulled out my phone and started listening to the latest Serial podcast. I didn’t listen to the last episode and planned to pull it out during the end of the race. It helped, but not much. I took some stretch/walk breaks and vowed to never run two marathons in two weeks again.

Miles 25-26.2 (13:01, 13:15, 11:56) I was just so done at this point. What made it worse was that the last 1.5 miles were up a pretty steep hill. UGH. Torture. I thought the finish would never come! But, FINALLY! There it was…and there was K about 100 yards from the finish. I tossed my water bottle to him and booked it (haha, except not really – I was running SO slow but it felt fast!) across the finish line. I think I told K “I’ve never been happier to see a finish line.” I’m not sure if that’s true but I was pretty happy.

My take on the race: This race was small, with only about 400 participants. We started and ended at a school, which was nice because we had a warm place to rest until the race and bathrooms! It was COLD on race day and I felt like the temperature actually dropped while we were running. I never felt warm enough to take my gloves off and my thighs were frozen. I was pleased with my outfit choice, though – even with the cold thighs. One couple I passed a couple times on the trail (and chatted a bit with after the race) called me their spring time girl and I loved it. The trail was beautiful, flat except right before the turn around and the last 1.5 miles and pretty stable – although there was some loose gravel and a few muddy parts. The swag was amazing: a huge medal, a half zip jacket, and gloves. All for $100 – such a deal! There was hot soup, bagels, chips and doughnuts at the finish and we could hang out in the warm school for as long as we wanted. Score! 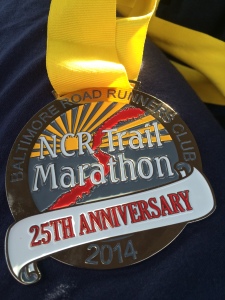 The medal was a really nice surprise for such a small race!

I have more thoughts to come on racing two marathons so close together and some final thoughts on both Richmond and NCR Trail but I will say this: I really liked this race and it’s one that I would definitely run in the future. 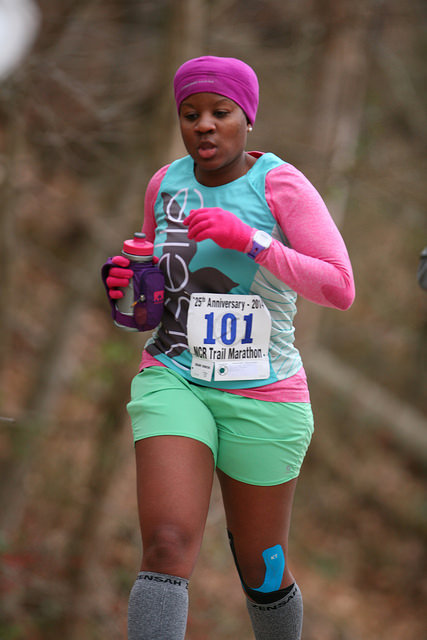 Have you ever raced back to back marathons?