I recently raced the Phoenix Women’s Half Marathon – key word being raced. I wasn’t really planning on racing this one. The whole weekend was a big Oiselle team meetup and since I have my goal race in March, I was just planning on running easy and using the race as a long run. The week of the race, I started to think that maybe I would use the race as a tempo run and shoot for my goal pace for the first 6-8 miles and then make a game time decision on whether to go for it or not. I decided I would do just that, especially after my Oiselle teammates Cathy and Tara and I all decided to run together. 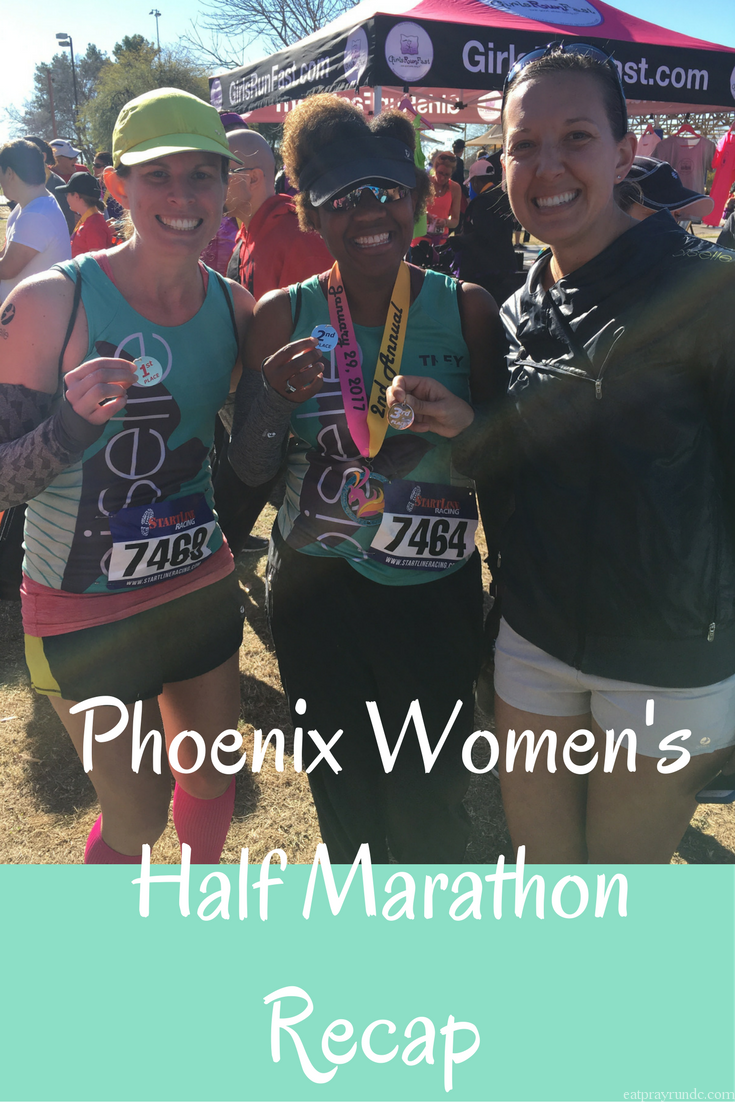 Race morning dawned chilly in Phoenix. I was actually wishing I’d had my gloves before the race started. I did however have my new lux arm warmers and they were perfect with my singlet and shorts. Here’s how the race went down. 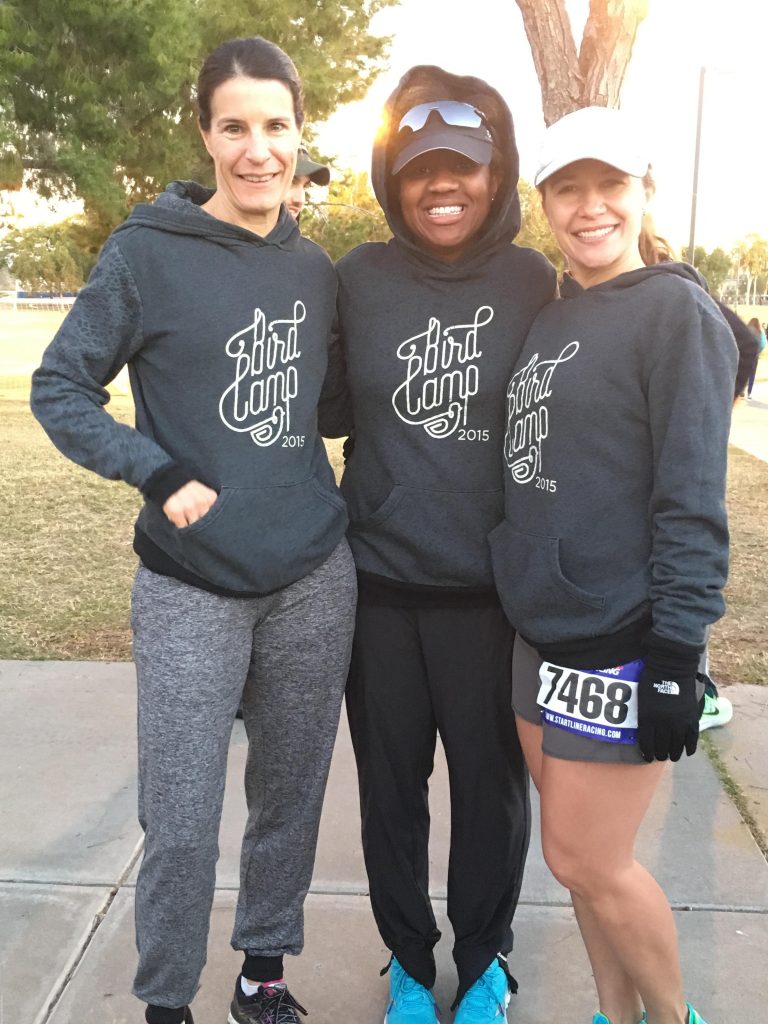 I started off with a TON (like over 40, I believe) of my teammates as the half kicked off right at 8am. My plan was to run with Cathy and Tara as I mentioned and we got off the start line together. The race took us alongside a canal but also through numerous little underpasses where we had a downhill and then an uphill. They weren’t steep but there was a ton of them and since the course was an out and back, they got old kind of quick! By mile three, I was mostly running with another teammate from OK, my friend Becky. We chatted and high fived and cheered other teammates and runners along the way.

These miles were pretty uninteresting, but they flew by and were my fastest miles of the day. I was feeling really very strong and having fun running and chatting. I took my first Huma gel during mile 5 and then grabbed some water at the next water stop. I also saw my friend (and teammate) Trax kicking butt – she won the race in 1:27 and change!

I find that in a half marathon, miles 8-11 are always the hardest for me and this race was no exception. By mile 8, I was basically alone and I was in the pain cave. My legs were burning, my throat was burning (the dry Phoenix air) and I wished desperately for chapstick. I hated not having anyone to run with but I’d pulled ahead of my friends ever so slightly and while I thought hard about just pulling over to the side of the road to wait for them (race delirium knows no bounds with me), I kept going mostly because I hate quitting and also I just wanted to be done.

By this point, I realized I could have a pretty big PR at this point and I convinced myself to just do my best to hold on the best I could. Right after mile 10, we passed by the start line, where lots of teammates were cheering and that pumped me up a bit. But then after that point, I was again solo and I’ll be honest, it sucked. I did see Steph Bruce cooling down and she cheered me on, which I very much appreciated. I just kept telling myself that I could do anything for two miles – that it was less than 20 minutes. That eventually worked and then, before I knew it, I was coming in for the finish. I crossed to tons of cheers and kudos from teammates and immediately beelined for the Gatorade for my dry throat.

The race was fun because of my teammates but it was not what I would call flat and those little underpass hills were tough. I also found the back half of the race challenging – I struggle sometimes when I’m planning to run with people and then find myself alone and that was a mental challenge for this one. But in the end, I managed to pull out a pretty significant PR.

For the first time EVER, I placed in my age group! I ended up 2nd in my age group, which has never happened to me before and honestly, probably won’t happen again unless I seek out another small race. There were 46 people in my age group and I was 2nd – AND my good friend Colleen was 1st! For perspective – Colleen ran about 5 minutes faster than I did – our age group was just pretty small. I was the 36th woman overall, out of 313 that finished. I will take that! 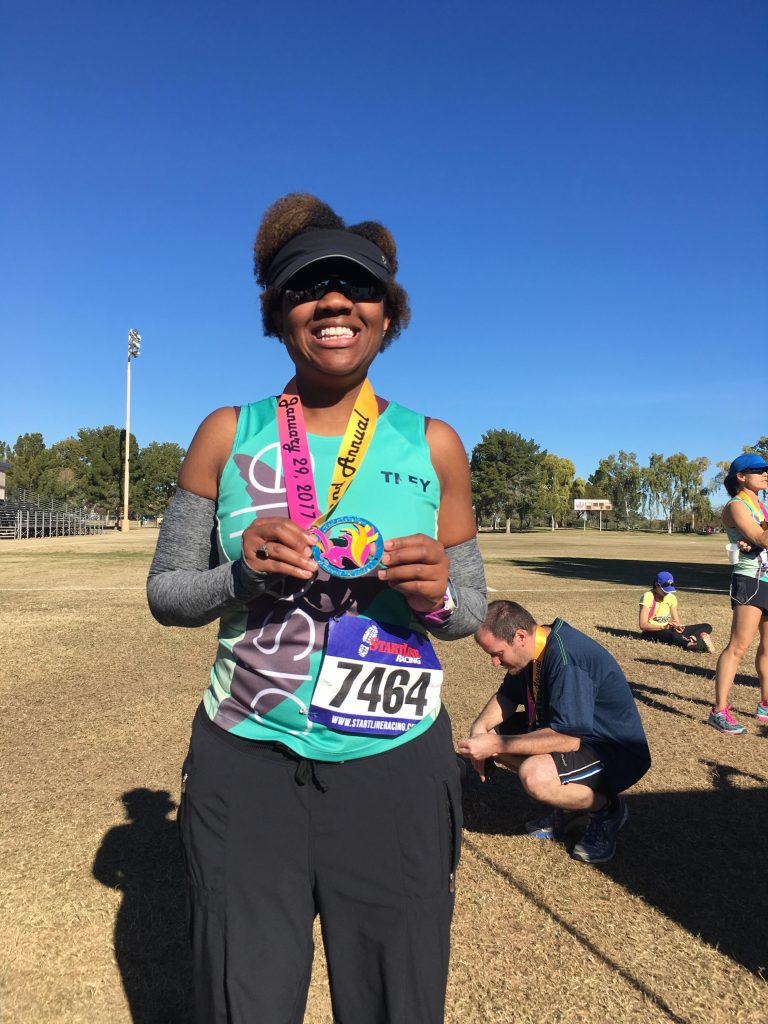 I am spending this week recovering from the race (my quads were shredded from racing + the VERY challenging hike we did the next day) and then I’ll jump back in to training for my goal race in March. Although I now have to reevaluate my goals since I was shooting for a 1:53 in March and just ran faster than that. More on that once I figure it out. 🙂

Have you ever raced in the desert?