The Rehoboth Seashore Half Marathon has become a must do race for me. The race is always a part of a super fun girls weekend for me and some friends. We rent a house, run the race and then have SO MUCH FUN. It’s a great way to end the year and while it was not my final race in 2017, it feels like a nice beginning of the end of a year of racing.

This year, I had the honor of pacing my friend and Oiselle teammate Jen to her first sub-2 half marathon. We had planned this race for months. We had also practiced pacing, our plan and every detail for months. Our general plan was to start on the slower side, hold a consistent pace and then see where we were around mile 11. 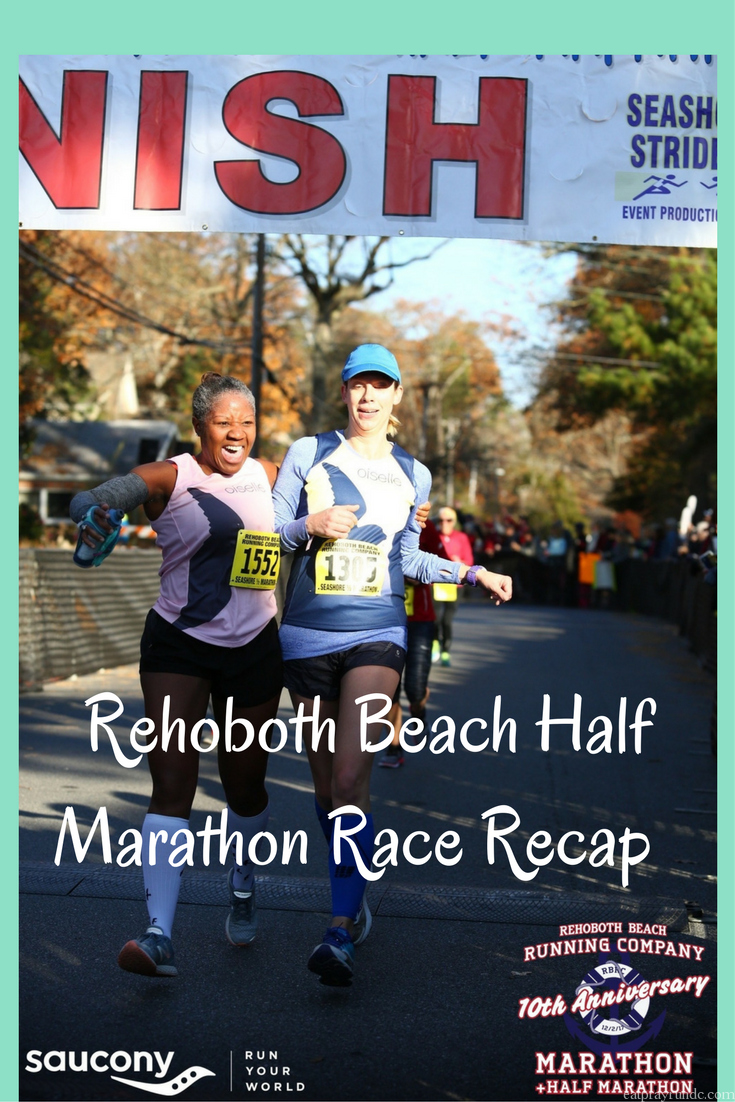 We started off just after 7 and I tried to keep us from going out too fast. The first few miles are half marathoners alongside full marathoners until the full marathoners break off around mile three. I was anxious to settle in to a pace that we would hold for most of the race. Perhaps a wee bit too anxious, hence that third mile!

After the first turn around, I grabbed water at mile four and we keep trucking. Miles 4-6 we ran through neighborhoods and lead us directly to the beginning of the marsh area that contained the trail we would spend just over four and a half miles on. I had warned Jen that our pace might slow a tad when we got to the trail, but that it wouldn’t be a problem.

We got to the trail and all of a sudden the 2 hour pacer was right behind us. I remembered this same pacer from last year. He ran much faster than he was supposed to be pacing and by the end of the race, I saw him literally just standing still waiting for his group because he had dropped every single one of them. I was very upset about witnessing this last year because that is just a horrible pacing job. When I saw him again this year, I told Jen that it was the same guy and for her to ignore him and just focus on me. Well, he was loud as heck. He was literally right behind us and yelling pretty obnoxiously. Now, obviously if you have ever spectated with me (or really if you just know me), you know that I’m a loud cheerer. This guy was obnoxious and right in our ears. I told Jen I was going to try to clear a little distance between us and the pacer and for her to just stay on my heels.

Finally, we got off the trail and were closing in. Jen was tired but still working hard and I was so proud of her. I told her that she as going to go sub-2 and it was going to hurt either way, so we might as well keep pushing and run a 1:57 rather than a 1:59. That motivation worked! We pushed it for the final miles and came in WAY under 2 hours! Final time: 1:57:55

I was really honored to pace Jen to her first sub-2 half marathon. Sub-2 was something that took me quite awhile to achieve and meant a lot to me. Jen has become an incredibly strong runner this year and while I never doubted she could do it, it is so amazing to see someone come to the realization that they are capable of doing something they never thought they could. All the feels, y’all! This race and this weekend has become a must do for my group of running girlfriends and I highly recommend it!

Anyone else pace a friend to a goal?