The Richmond Marathon is my absolute favorite marathon. I have now run it three times and it is the only marathon that I have repeated multiple times. I love the Richmond Marathon for a number of reasons. It was my very first marathon and I don’t think anything will ever make that less special. I love the course, the crowds and how easy the race is to navigate. And of course, there is the famous Richmond finisher’s blanket. That thing is legit. So I was thrilled to go back to Richmond to run my 9th marathon. Here’s how it all went down. 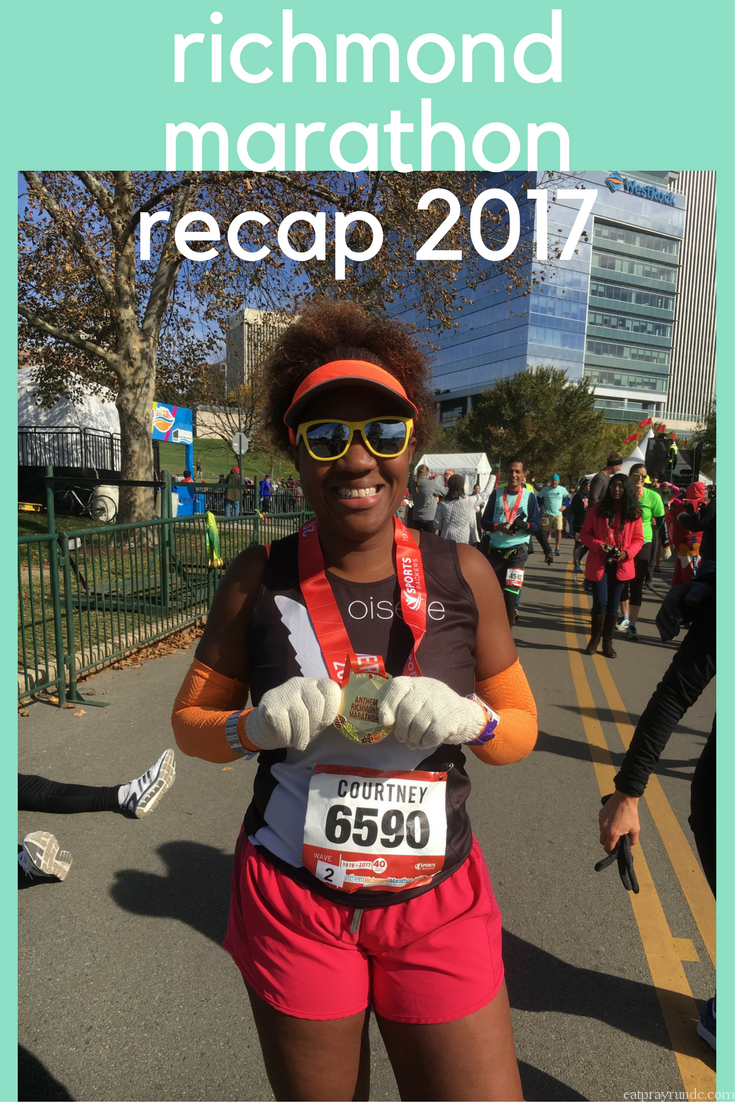 You might recall that I had some pretty big goals for Richmond but was also very pragmatic about my race. I knew it might not be smart to run two marathons in six weeks with minimal training in between the two, but I thought I’d try anyway. Richmond always has a way of surprising me and teaching me something about myself.

This year, race week was stressful. I don’t really want to recap the whole week here but I shared a bit right after the race on Instagram, so if you haven’t seen that post, please go check it out here. Essentially, I learned that no matter how hard you try, you can not always outrun things that are happening in your life. I have always known that, but sometimes you need a refresher course and this race was that for me. But anyway, I am sure you actually want to hear about the race. So here we go.

The race dawned on an unseasonably cold morning in Richmond, but the cold is good for running, so I was pumped. I started out in wave 2 and decided I would just run and see how long I could keep my pace around the 9 minute mark. I ran into a couple of my Oiselle teammates who were also racing early on and saw various teammates (including Liz, who I ran with for quite awhile -both in the beginning and the end) a number of different times, which was fun. 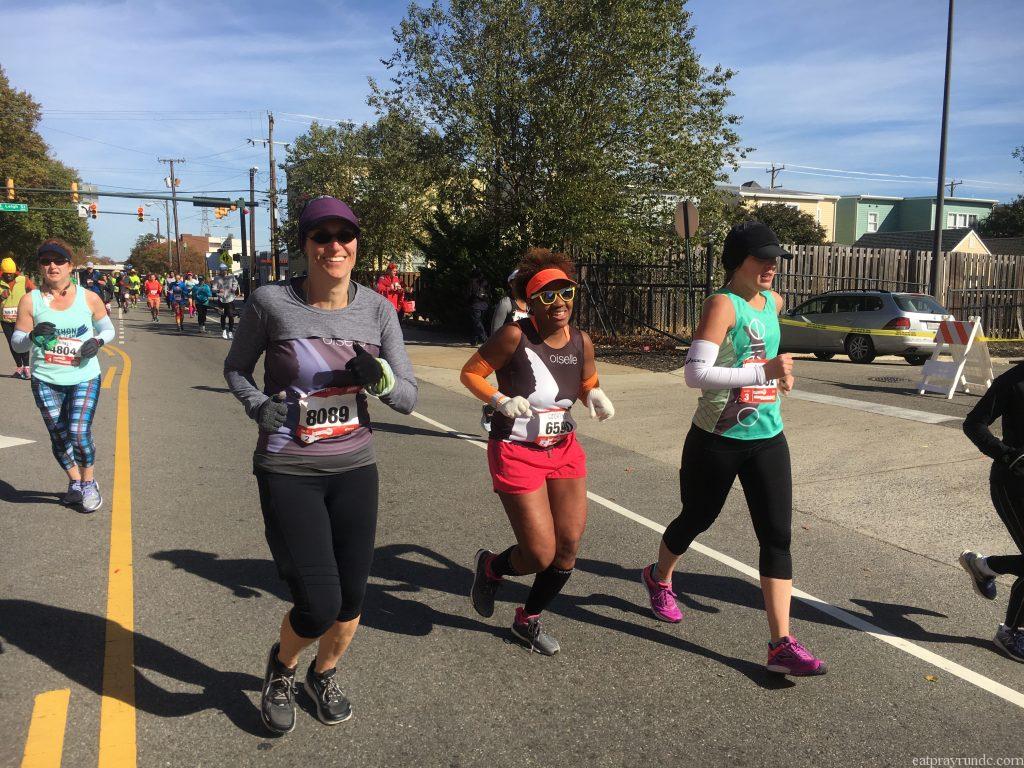 Miles 1-6 start with a gradual incline before heading to the first party station and heading over the James River for the first time. I trotted along, feeling good but not great. Nothing hurt but I definitely sort of wished I had chosen to run the half, which made me laugh. 🙂 9:15/9:05/9:02/9:03/9:07/9:05

I hit the halfway mark at just about the same time I did during Berlin. The difference between that day and Richmond was that I was peaking in terms of fitness in Berlin and, well, I was not in Richmond. I was completely comfortable with my strategy of running very easy in between Berlin and Richmond and just seeing what happened. Well, what happened is I got terrible cramps around mile 17 and they continued for the rest of the race. If you feel like you have read this before, it’s because you have. I cramped up badly during the Richmond marathon in 2014 – pretty much the same scenario. Miles 14-18: 9:02/9:05/9:30/10:281/11:15

Final time: 4:33:34 While this was not a PR, this was a HUGE course PR. As I said, I have run Richmond three times. My best time prior to this year’s race was a 5:27 when I ran it as my first marathon in 2013. In 2014, I ran a 5:30. It is kind of wild to me to think that I ran walked for basically 8 miles and ran a marathon time that I chased for quite awhile. You might be wondering why mile 24 was SO slow (I mean all my miles from 18 on were slow but 24 was insane) – I was fortunate enough to have two friends and Oiselle teammates join me from mile 21 onwards. These women helped save the day for me. I was (and am) so incredibly grateful for them and I was an honor to have them by my side. Well, as we were approaching mile 24, I started thinking about my friend who had died earlier that week (see linked Instagram post above if you don’t know what I’m talking about) and just started getting very sad. At 24.5, the Oiselle crew was there cowbelling and when I saw them, I just flat out lost it and started sobbing. I stood there for a good while crying into various people’s arms. It was a sad but cathartic moment for me and it was probably exactly what I needed. 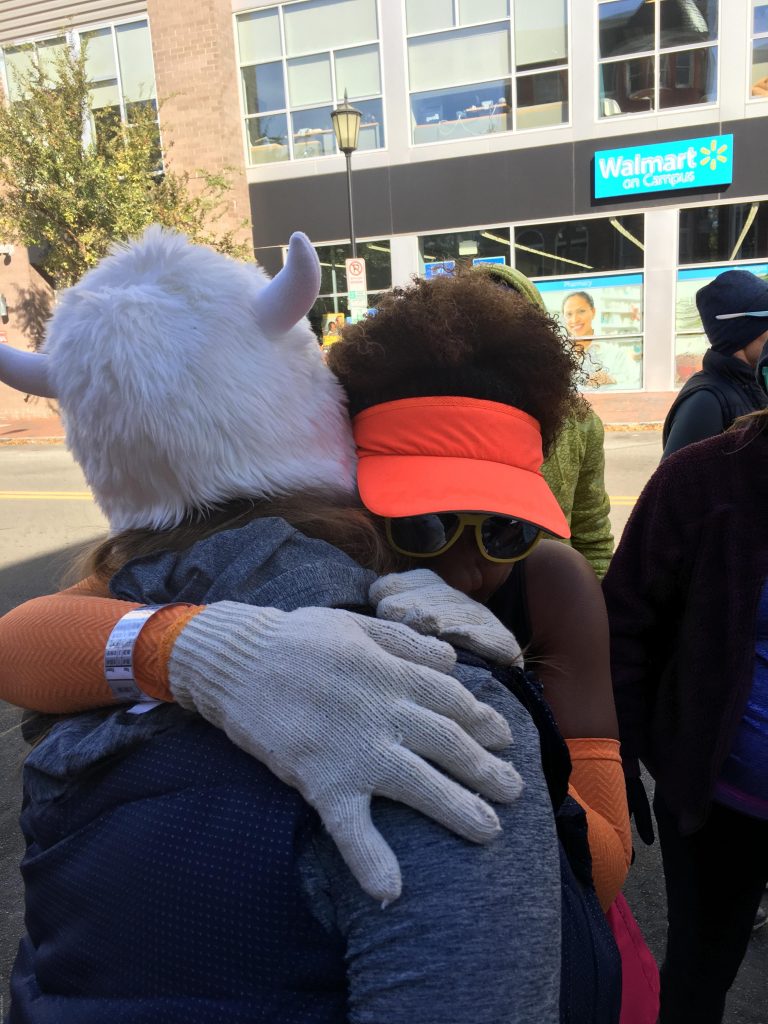 Richmond is a fantastic race. I expect to run it many more times and I encourage you to check it out.

Tell me – have you ever started sobbing in the middle of a race? It can’t just be me, right? 🙂