Here it is! My Richmond Marathon Recap — if you missed yesterday’s post, that’s a great place to start. We left off with us at about mile 10 and I’d just shed my ear wrap and gloves. I was feeling pretty dang good, to be honest. Happy, moving at a great pace and excited that things were just rolling along. If you are looking for a marathon, you need to consider Richmond. It’s well organized, the people of Richmond are awesome and the course has so much support. You will love it. Now, back to the race! 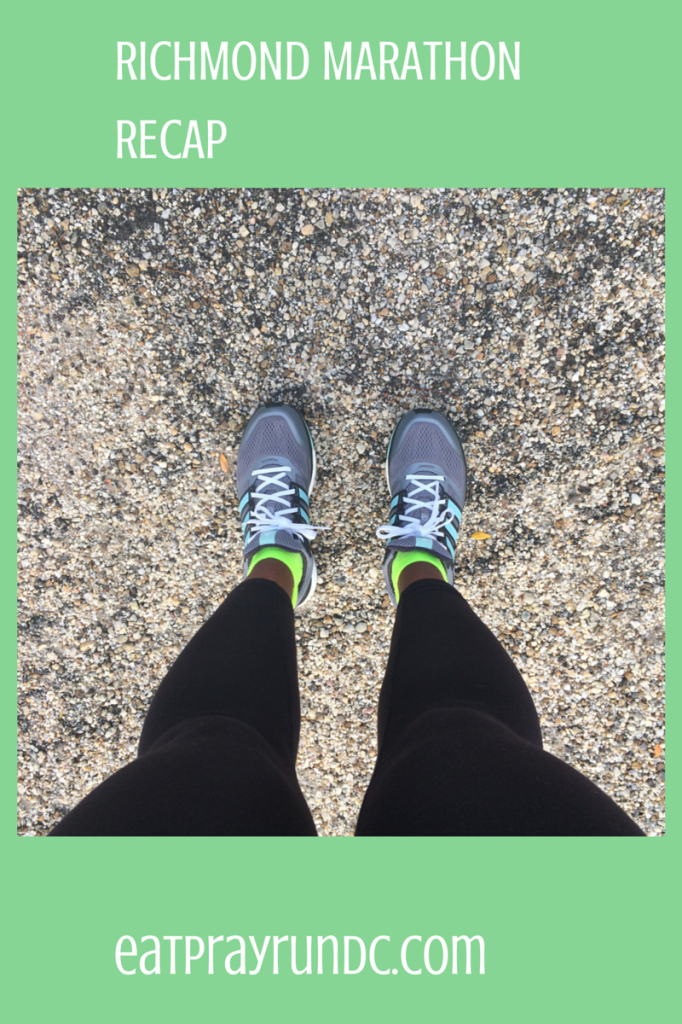 The race continued on and while I felt about how you normally feel 10 miles in, overall I was happy. I had forgotten how hilly some of those middle miles were and it was kind of fun to just push our way up the hills. The pace continued in the low 10s and the sun was shining. Richmond was out there in full force and I loved it. Around mile 14, I felt a spasm in my right calf. It caused me to stumble a bit and let out an audible “ouch.” K and Meghan asked what was wrong, I said I had a cramp but was fine. We kept on going. Unfortunately, my cramp kept on going as well. It got progressively worse as I kept running (duh, I should’ve just stopped the first time it hurt) and by the time I got to mile 16, I needed to stop and stretch. How can I describe it? It was basically like the most painful charley horse I’ve ever experienced…times 10. It literally made my knees buckle and brought tears to my eyes. We stopped on the side of the road while I cried a little as K tried to massage my legs. We continued on, at a slower pace, but it quickly became clear that the cramps were spreading and not going away. From that point on, they popped up every 1/2 mile or so. To put it mildly, it sucked. I was disappointed and for about two miles, I kind of was in a dark place. I was just so angry that after an amazing training cycle and doing all the right things, something so random and uncontrollable as leg cramps was going to sideline my race.

Then…I got some perspective. I was running my THIRD marathon in exactly one year. My training had been excellent, my race (up until the pain) was great and I was healthy. I was doing something that not many people get to do and even fewer are able to do. AND I was doing it with my husband. How amazing is that? While K is faster than me in an all out sprint, I’m a faster distance runner and our plan was not originally to stick together. However, given that I needed breaks every half mile or so, it meant that we were going at a pace that worked for him. So, I got to run every step of my husband’s first marathon with him – which wasn’t the original plan. What a blessing. I am so proud of him and so thankful that we got to do that together. I can’t overstate what it meant to me to be able to share something I love so much (and yeah, I’ve accepted that I love the marathon) with the man I love more than anything.

And, to be honest? After I had my 20 minutes of feeling sorry for myself – I embraced EVERYTHING about the race. I smiled the whole time – I ran fast when my legs weren’t cramping and walked when they were. I saw Bart Yasso one more time and that was awesome. I crossed the 22 mile marker cheerful and happy and remembered what a terrible place I was in at mile 22 last year. This year, I felt great. When we came upon the group handing out shot glasses of beer, I said “what the heck?” and took one. It tasted awesome. I chatted with people around us, I high fived kids and I thanked every single person that was out there cheering and volunteering. As we approached the finish, I bragged on my first time marathon husband and that was SO fun. The race might not have been what I anticipated — but in the end, it was so much more. It was an important reminder to me about what really matters – and that isn’t BQs, times, or PRs. It’s people. And I’m so blessed to have so many amazing ones in my life. 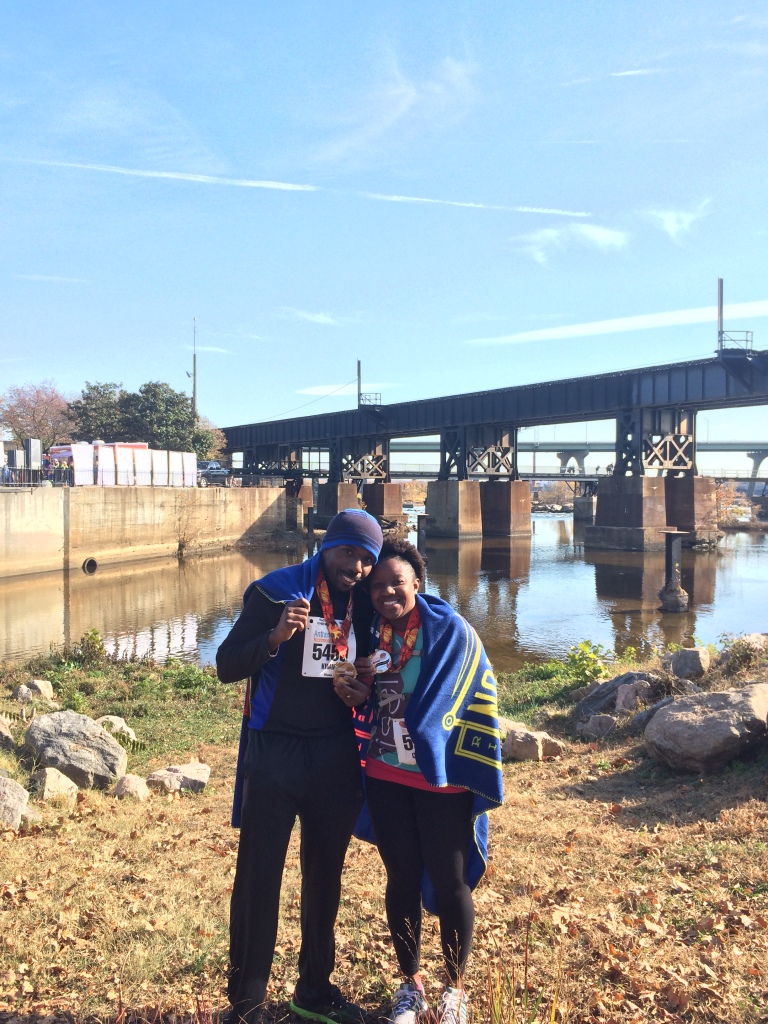 I’ll talk later this week about lessons learned and what I think was the cause of the cramps, but I wanted this recap to focus on all the good that came from last Saturday! Meghan had a great first marathon, K and I crossed the finish holding hands and I wouldn’t have had it any other way. Such a great day, such a great race and such a great city. Thank you, Richmond!

Tell me: have you ever had a race not turn out like you planned but it ended up being perfect anyway?