I am so excited to share the details of the 2016 Shamrock Hakf Marathon with y’all. Warning: my Shamrock Half Marathon Recap will not be short – so grab a cup of tea and settle in. If you just want the short version, here it is: terrible weather conditions, 8 minute PR, and the Hanson’s plan works. Now on to the details! 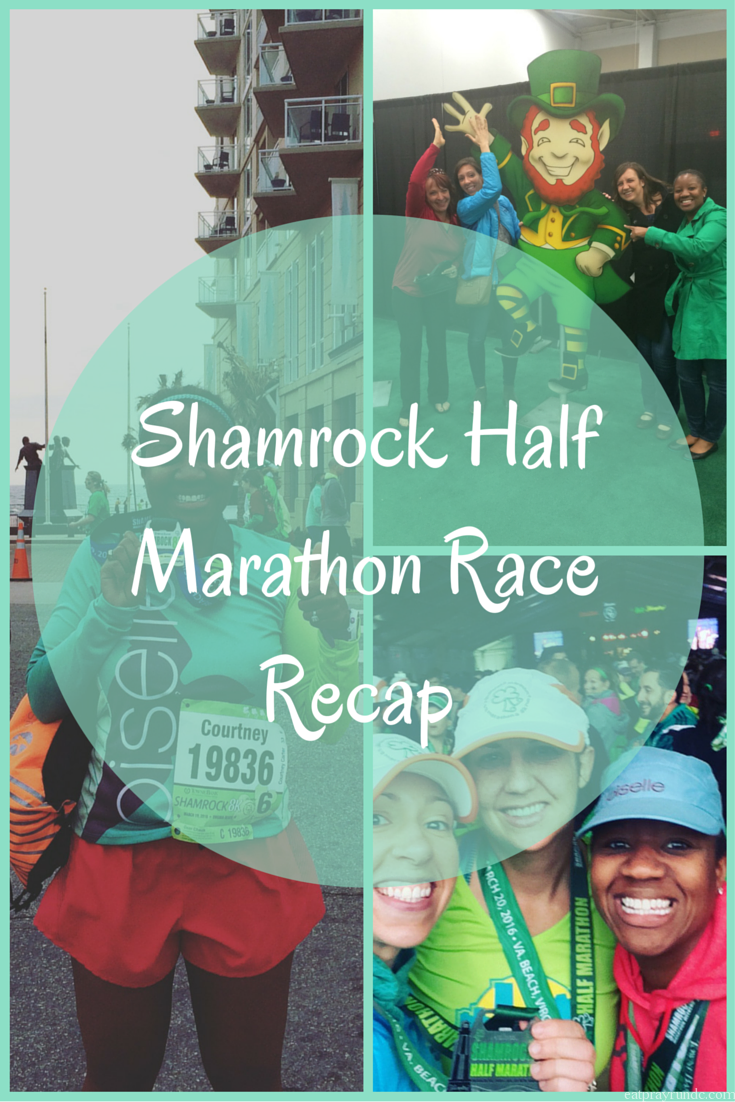 The plan for the weekend was to head to Virginia Beach Friday afternoon to grab our bibs because a couple of us were running the 8k Saturday morning. Traffic was a bit of a mess and we made it to the expo with just 15 minutes to spare before they closed. 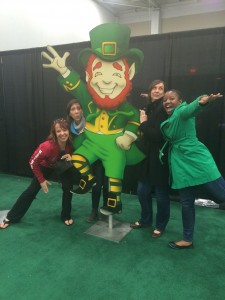 We grabbed dinner and then turned in fairly early. I planned to use the 8k as a shakeout run and take it nice and easy. The weather was a bit chilly and windy on Saturday morning, but it wasn’t awful. I ran the 8k easy – just running by feel and not paying attention to splits. We ended up running at a 9:48 average pace, which was great. Fast enough to get the legs moving, but not so fast that it felt like work. After the race, we dived into a huge breakfast at the legendary Virginia Beach establishment, Pocahontas Pancakes, and went back to the hotel to shower, warm up and NAP. It was glorious. 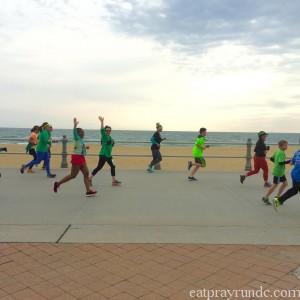 We went back to the expo to browse since we’d hadn’t had a bunch of time there Friday night. We got to chat with Bart Yasso, who I always enjoy. He’s just so nice and such a great guy. He told us a couple of hilarious stories from some of his previous marathons and we wished him luck on the full marathon the next day. Then we took a “Bartie!” 🙂 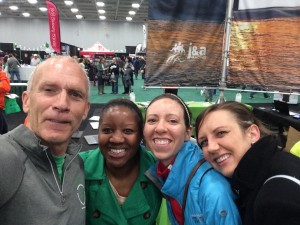 Sunday dawned cold, windy and rainy. And it was not awesome. We lucked out in that our hotel was just a few blocks from the start so we waited in the lobby until about ten minutes before the start. I didn’t know this at the time, but the winds were around 20mph, gusting up to 30mph. It was intense. I wore a long sleeve Oiselle mesh top, my singlet over that, my favorite Oiselle distance shorts, a hat, throwaway gloves, Zensah calf sleeves and my Mizuno Wave Riders. While I was definitely cold from the rain, I felt like my outfit choice was solid. 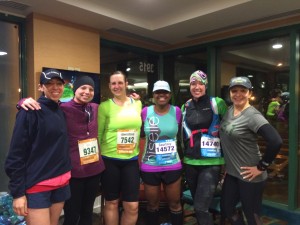 As I mentioned, when the race started, the weather was pretty awful. High winds, cold rain and chilly temps made me a bit unsure of how the morning would go. However, I kept thinking to myself “a bunch of people are going to run sub-2 today…why not me?” My race plan was to try and run in the low 9s for the first 6/7 miles and then to let the pace drop into the 8s for the final 10k. As you’re about to read, I generally followed my plan, with a couple of slight variations. On to my recap by the miles!

Miles 1-4 (9:30/9:04/9:22/9:07): We headed out and were instantly soaked and cold. As we began running, I was focused on my form and just getting a little room. The first mile was a bit congested, but things cleared out shortly afterwards. I was running with Christina and Becca, though we lost sight of Becca early on in the congestion. The first mile was a little slow, but I intended that to be the slowest mile of the day (and it was!), so I didn’t freak out. We trucked along in the cold and just kept running – until we got to mile three and I realized my shoe was untied. This has NEVER happened to me during a race EVER. And the irony is I had asked Christina if her shoes were tied before starting as a bit of a joke because her shoes came untied a couple of weekends ago. Ugh. I had to pull over to stop to tie my shoe and then we kept moving. Even with that stop, we ran a 9:22 but I was a tiny bit concerned about making up that time. About a mile later, my OTHER SHOE CAME UNTIED. I’m not even joking y’all. I told Christina to keep running and that I’d catch up. I moved to the side (AGAIN) and stopped (AGAIN) to tie my shoe. At that point, I chucked my gloves (I’d bought them for $2 at the expo) because they were soaking wet and weighing me down. I quickly caught up to Christina and in my effort to catch her, I’d quickened the pace quite a bit. After that mile, I pulled ahead a bit and lost Christina. However, she and Becca later found each other and ran 6-10 together, which makes me happy. Oh, and mile four when I had to stop again to tie my other shoe? Ran a 9:07. I was kind of proud of that and it may have actually been a blessing in disguise because when I picked up my pace after tying my shoe, I never really backed off and it set me up for a good race.

Miles 5-8 (8:54/8:44/8:48/8:47): Right after I lost Christina, a runner passed me and said “head up, wings out”(which is an Oiselle thing). When I caught back up to her a mile later, I asked if she was on the team. She wasn’t but liked the brand and knew the course really well. I told her I was trying to go sub -2 and we chatted for the next couple miles before I pulled away. She helped distract me during some intensely windy middle miles and I was intensely grateful.

Miles 9-13.1 (8:50/8:36/8:34/8:35/8:37/8:00 [last .1]): Mile 9 was the last crazy windy mile as we came off Fort Story. I knew we’d have a tailwind (or at least no more headwind) for the final miles and so I got ready to work. I met another runner who wanted to best her 1:59 PR and we decided to work together. We dropped pace by about 20 seconds and each of the final three miles was in the 8:30s – I was working hard, y’all. At some point I realized I was going to go sub-2 big time and that I could even top my A goal if I kept working. Around mile 11, I saw my Oiselle teammate Leeanne cheering and that was awesome! I then saw Sue of This Mama Runs for Cupcakes and Erin. Sue was in serious pain and I hated seeing that but she pushed through and finished strong. I kept pushing and before I knew it, I was back on the boardwalk and the finish line was in sight. I gave it absolutely EVERYTHING I had left (which was not much, to be honest) and pushed forward towards the finish line. I stopped my watch after I crossed and knew I had gone sub-2 by quite a bit!

When I finished, I felt a bit like I was in shock. I think that was more due to the fact that I was frozen and slightly in disbelief that I’d finally, finally gone sub-2. I got my dry bag from bag check and made my way to the after party tent (thank goodness, they set up a tent!) and waited for my friends. I pulled out my phone and was so overwhelmed to have TONS of encouraging text messages! Including some from friends who texted me a picture of my time – I appreciated that because I wasn’t exactly sure what my finish time was. My friends amaze me with their support. Thanks to all of you who prayed, thought about me, wished me well, texted me, left a kind note on Instagram, Facebook or Twitter. You are appreciated more than you know! 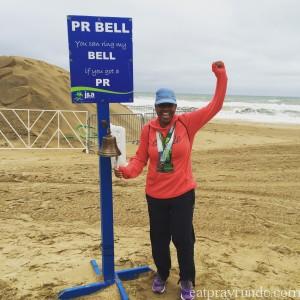 What are the worse race conditions you’ve ever run in? Shamrock takes the cake for me, for sure!