If you are a man reading this post, then you are probably really confused by the title. However, I’m willing to bet that most women instantly got it and probably a number of you nodded your heads along in agreement. I have experienced an uptick in the number of times I’ve been told to “smile” lately and it really just gets my goat so I thought I’d put pen to paper (so to speak) and write about why I hate being told to smile so much. 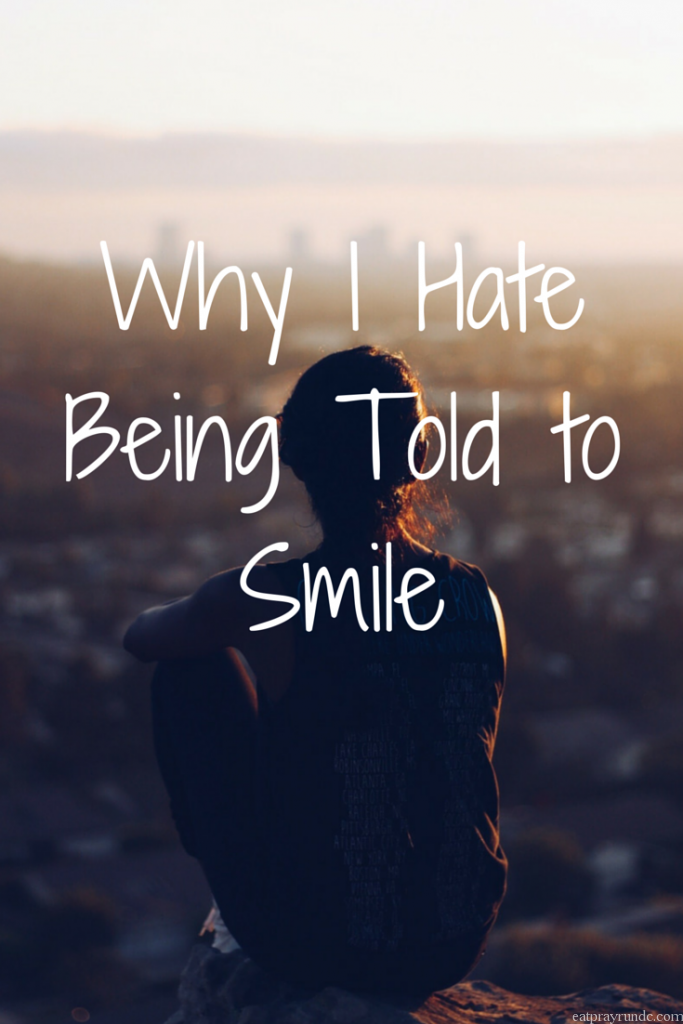 This is how the exchange usually works: I’m walking around, running errands or whatnot, just minding my own dang business when a man (it’s always a man) walks up to me and says something like “smile, baby.” Enter my rage. I typically just stare blank faced at the man until they get my point. Lately, I’ve been so irritated that I’ve started responding. Last week it happened it Costco (my happy place). Same scenario, except this time when I just stared blankly, the dude said “okay, don’t even try.” I flipped around, wagged my finger and told him, “I don’t smile on command.” He didn’t say anything and I’m pretty sure I saw the elderly woman giving out samples of snack bites wink her eye at me.

So why do I hate being told to smile? Well…here it is. When a man tells a woman he doesn’t know to smile, he isn’t just being cute. In fact, there’s nothing cute about it. There is a reason that I have never, ever had a woman I didn’t know tell me to smile. There is a reason that men don’t walk around telling other men they don’t know to smile. When a man tells a woman (that he doesn’t know) to smile, he is implying that she owes him her smile. That it is her job to walk around with a smile on her face so that he feels comfortable. But it’s not. It’s not my job nor my responsibility to do something to make a stranger comfortable. Nor is it my job to smile on command to make you happy. The idea seems ridiculous to me.

I am sure that most men have no idea the feelings that they are evoking when they tell a strange woman to smile. When I’ve had this conversation with my husband, he didn’t quite get it but of course supported me in how I felt. So I understand that this post is not going to change anyone’s mind. But. If you know that something you are doing makes someone else uncomfortable, would you continue doing it? I hope that the answer is no. And yes, beneath the rage, having strange men tell me to smile makes me feel uncomfortable. It reminds me that just because I am a woman some men feel as if they have a claim to how I’m supposed to look, to how I’m supposed to act. It’s the same feeling I have over and over again during the summer when I run in shorts due to the crazy DC heat and humidity and get alllllll kinds of comments (that’s a story for another day). That same feeling of “this is wrong.”

I want to end this post by saying I have nothing against people being friendly. I’m from Alabama, y’all. I actually use the word y’all in regular conversation. I love people. But that doesn’t require me to walk around with a fake smile plastered on my face. Especially because that smile is then seen as an invitation to a conversation I don’t want to have with men I don’t want to talk to (because they don’t want to talk – they want something from me. We all know that). There is nothing wrong with being friendly. There is nothing wrong with saying hello. There is something wrong with issuing a commandment to a stranger as if you have a right to command her to change her facial expression to suit you. And “smile, girl” or “smile” or “why don’t you smile?” is not friendly conversation. It’s a version of a man attempting to display his power over a woman he doesn’t know. I fully understand that this post might not make sense to some of you. But I know after talking to so many friends who this happens to on a regular basis that I am not alone in this. And if this post inspires just one man to quit telling strange women to smile, then I will be happy.

Has this ever happened to you, ladies? Do you care or does it not bother you?