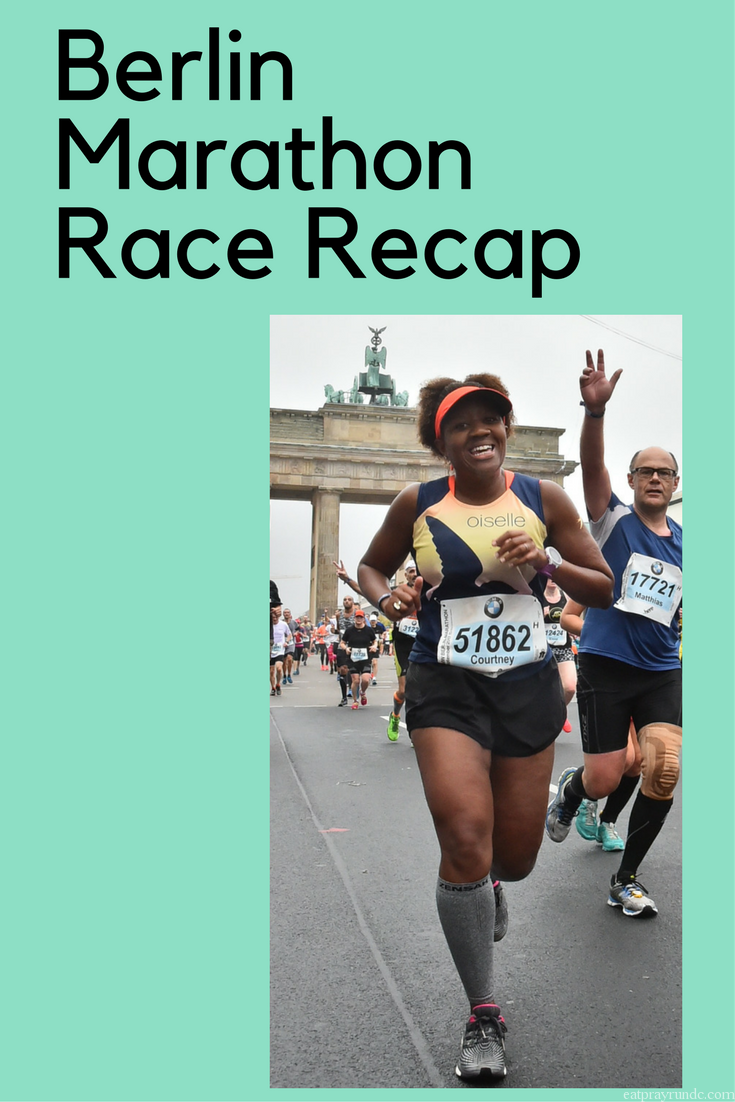 The weather was looking good leading into the race, but to be honest, I didn’t worry much about the weather anyway. In my mind, the weather will be what it will be and I can’t control it so no sense worrying about it. I did think it might rain (which it did). The one thing I kept saying was “well I know that Berlin does not have humidity like we have here in DC, so I’m not worried about humidity.” A reasonable enough statement. But unfortunately, with it raining the night before the race and the morning of and then some during, the humidity was at 99% at the start of the race. 99% and 57 degrees F to be exact. Not so great. BUT – I have PRed before in poor weather (hello, Shamrock and my first sub-2) and thought that I could do it again. The race consisted of three waves and each wave contained a MASSIVE amount of people. I was in the last wave (for people with marathon PRs of 4:15 or higher, plus all first time marathoners) and we did not start until 10am. But…before getting into the nitty gritty, let me say this. I was really lucky because on this trip, I traveled with a number of my Oiselle teammates and that added SO MUCH to the trip overall. I will talk more about my adventures in a future post(s) but truly being with teammates abroad was an AMAZING experience. Back to race weekend. After a fun shakeout run with some of the other Oiselle gals running the race the day before, I was ready. 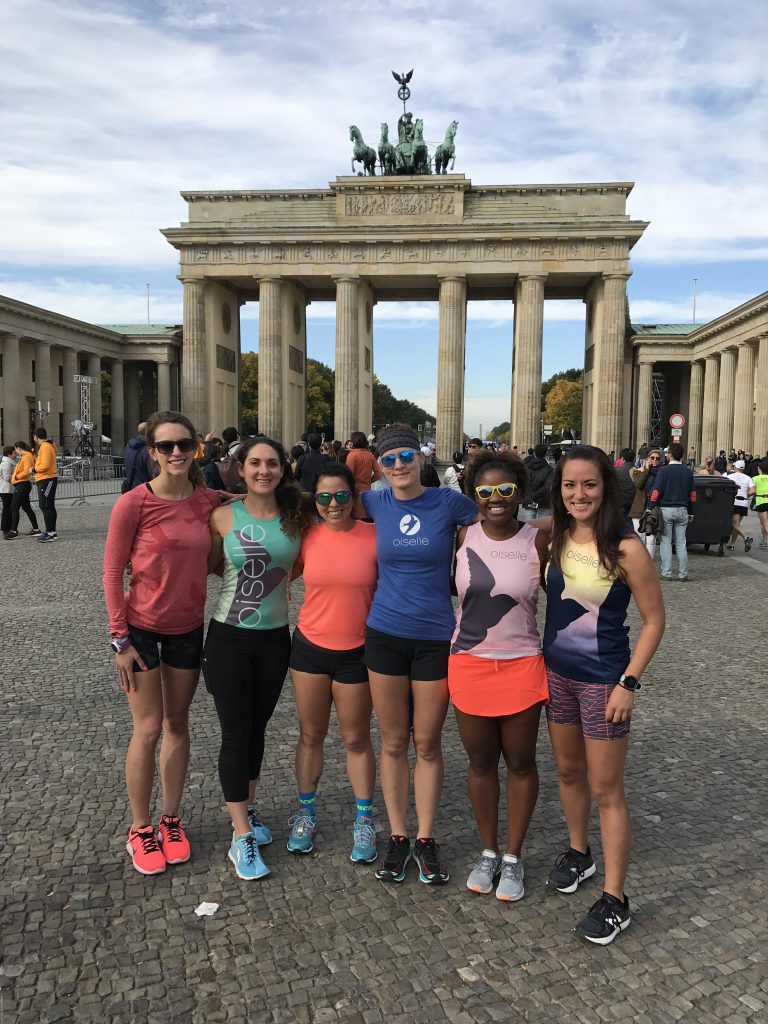 On race morning, Sheila, Mike (Sheila’s awesome husband) and I headed over to the start which was in between the Brandenburg Gate and the Victory column. We ran into Carolina, had a final bathroom break and then headed to our respective start corrals. As I mentioned, my wave took off at 10am (on the dot – German efficiency!), so I had about an hour in my corral. When it was finally our time, I found myself getting uncharacteristically emotional. I mean, I am definitely an emotional person and cry at pretty much anything involving dogs or dads (total daddy’s girl here), so crying is my MO. But I generally don’t cry in public and I have never teared up at a starting line before. I think I was just so overwhelmed with the weight of where I was – Berlin, Germany – and what I was doing – running my 8th marathon. I felt incredibly fortunate and just so grateful to be doing what I was doing. So, with tears in my eyes, the race started.

The course was incredibly crowded. From start to finish, it was packed and I constantly had to maneuver around people. I felt like a football player at times because I ran a lot with my arm out in front of me to stop people from running right into my path. That said, I got into a groove pretty quickly and just kept trucking. I did feel the humidity pretty early on. It was just gross and the ground was slick because of the rain. I ran with my handheld because I had heard that the first couple of water stops were insane. Well, that was not true. ALL the water stops were insane until about the 35k mark. They were just a hot mess. I was happy to avoid them for awhile.

I continued to settle in and just focused on my form and trying to run controlled. My clothes were completely soaked through due to the humidity and I was very thirsty. I drank often and took a Huma gel at every 10k mark. I felt like I was working pretty hard to hit the splits I was hitting – which makes sense given the weather. I wish I could tell you what I was running past at this point, but honestly, the race was such a blur. I did not spend very much time looking around because I felt like I had to stay super vigilant while racing. I’ll talk about this a bit more later, but I am a bit disappointed that I did not enjoy my surroundings more. I loved the crowds and the bands but as far as getting a running tour of Berlin, that did not happen. I just couldn’t take my eyes off the road – I was very worried about falling or being tripped or ran into by another runner. I hit the half in 2:00 flat and knew I was a little behind my time, but hoped I could just hold on.

Somewhere in these miles, I ditched my handheld, which was a part of the plan. I then started walking through each water stop – I knew that hydration was incredibly important and to be honest, the quick breaks were welcomed. The race was starting to get very hard, which you can see in my splits. I tried very hard to adjust in my head – but figuring out the kilometer to mile conversion and trying to do math just was not working, lol. The picture below was right around the 30k mark. I know because I remember being excited for my strawberry Huma gel at 30k, haha. Also, somewhere around this time, I ran into Travis and Marilyn. Marilyn is one of my Oiselle teammates and she and her husband Travis were running together. It was FANTASTIC to run into them during the race, especially because it was late in the race and I was getting tired. It pumped me up to see them and Marilyn even snapped a couple pics, one of which you can see on her great race recap here.

Well, like I said, it got really hard. I continued to walk the water stops and obviously I walked more than the water stops. I know that the humidity and the crowding on the course took its toll, but honestly, I was in a fight out there. I was hurting but marathons hurt, so I knew that would be the case. It just got so dang hard to run fast. That really is all it was. I was trying my hardest and I was just done – my hardest was not enough. Once I got closer to the finish, I started to get angry. I knew we were to run through the Brandenburg Gate about 400m before the finish line…But I could NOT see the Gate. It took all my will to not scream at spectators “where the F is the Gate?!?!?!?!” – finally, we turned and the Gate was in sight. Now I also knew that the Gate was not the finish line. But man, the 400m or so between the Gate and the finish felt SO SO long. I tried to smile for the cameras but I think you can see how I truly felt! 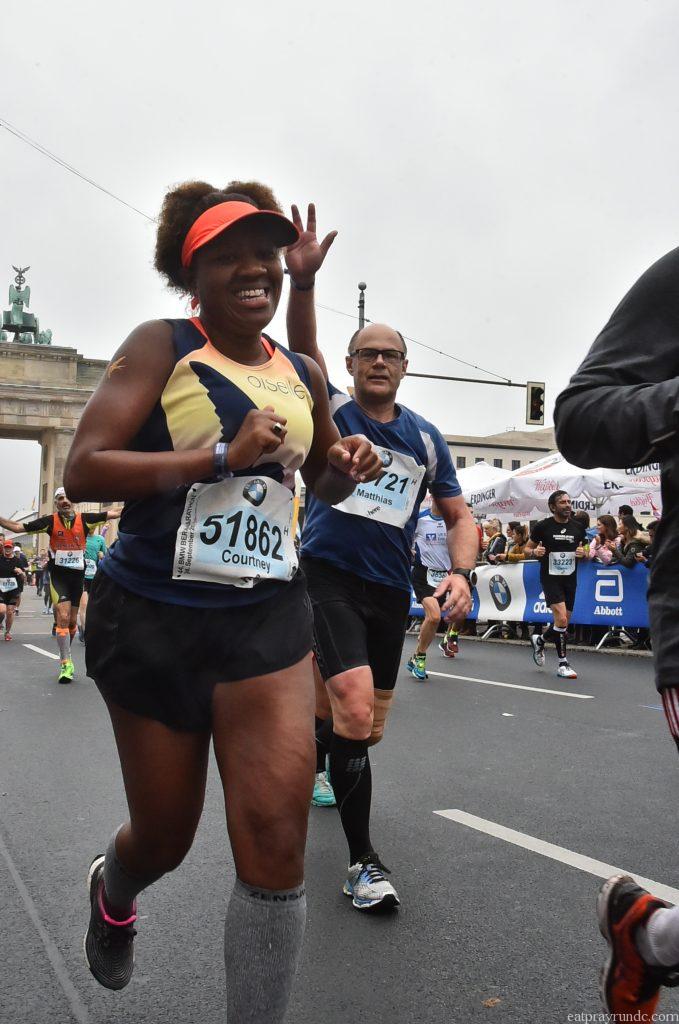 I felt absolutely horrible after I finished. I was so lucky because I ran into my friend and teammate Cecille right after I crossed. Cecille helped me get my timing chip off and we started walking towards the finish area. Because I hurt so dang bad (running marathons is hard, y’all), I had to stop a couple of times. One of those times we spotted Marilyn and Travis and called them over to join us. We all hobbled over to get our sweet finisher ponchos and just laid / sat down and ate a bit before leaving. Being with friends post race was amazing – and potentially life saving. I am pretty sure that without them being there I would have just laid on the ground in the finish area forever. I am only exaggerating a tiny bit. This race was a lot of things. Large, a great experience, crowded, tough, amazing, international and so much more. I think that in retrospect, I would NOT have chosen Berlin to be my goal race because as I briefly mentioned above, I barely saw the city as I was running. I think that for other international races, I will choose to run them for fun and for the experience rather than attach a big goal to them. I feel good about my race. Even though it was not what I expected, I worked very hard for that 4:14 and the fact that I ran 21 miles under a 10mm pace (and most of those miles under 9:30) is nothing short of amazing to me. I have worked very hard to improve as a runner and while I did not reach my A goal, I left every single thing I had in me on that course in Berlin. For that, I am proud.

One other quick note about the race. I have run a lot of races and this was my 8th marathon. This race felt overwhelmingly male. I felt like I was surrounded by men and saw relatively few women running. It was a strange feeling and I like it contributed some to constantly feeling like people were cutting in front of me, etc. I would be really interested to see the gender breakdown of the race. I could not find anything during a quick search online but it felt like the race was 65 to 75% male. Definitely different than what I am used to! 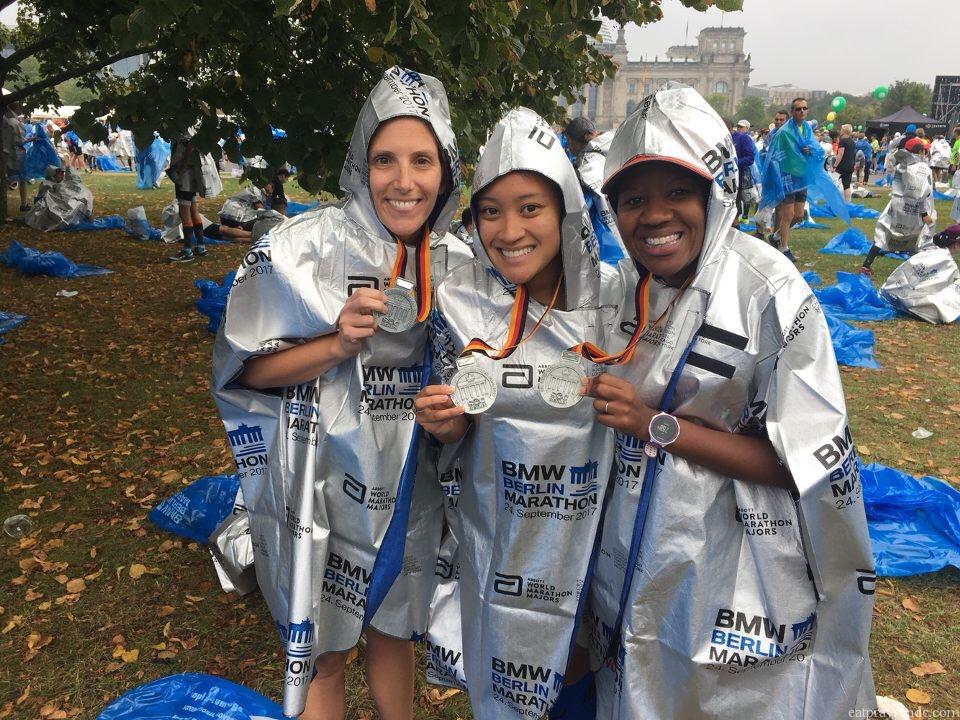 As far as what is next for me, well that is still in flux. I am currently signed up for the Richmond marathon in about 5 weeks. I have not decided yet if I will race the marathon or drop down to the half. I probably will not decide until the week of the race. Until then, I will enjoy some more causal running with the Army Ten Miler thrown in the mix for fun.

Have you run an international race? Did you race it or just run for fun?