As I mentioned in my training recap, last Sunday I ran the Leesburg 20k. I don’t know what it is with me and races in August — last year I ran the Annapolis 10 miler (here‘s my race recap in case you are running the A10 this Saturday) and this year I decided to brave heat, humidity and hills again. I was so excited to run this race, mostly because so many awesome DC area bloggers were also running it. This was a fun race to run and a fun race recap to write. So, without further ado, here’s my Leesburg 20k race recap:

Julie and I decided to stay in a cheap hotel the night before the race, so we could sleep in later Sunday morning. The hotel was a bit odd, but it served it’s purpose. I brought two different race outfits with me and crowd sourced my final decision on what to wear. I decided on the Lesko Shimmel Tank and Distance Shorts. This was a great choice and I loved what I was wearing: 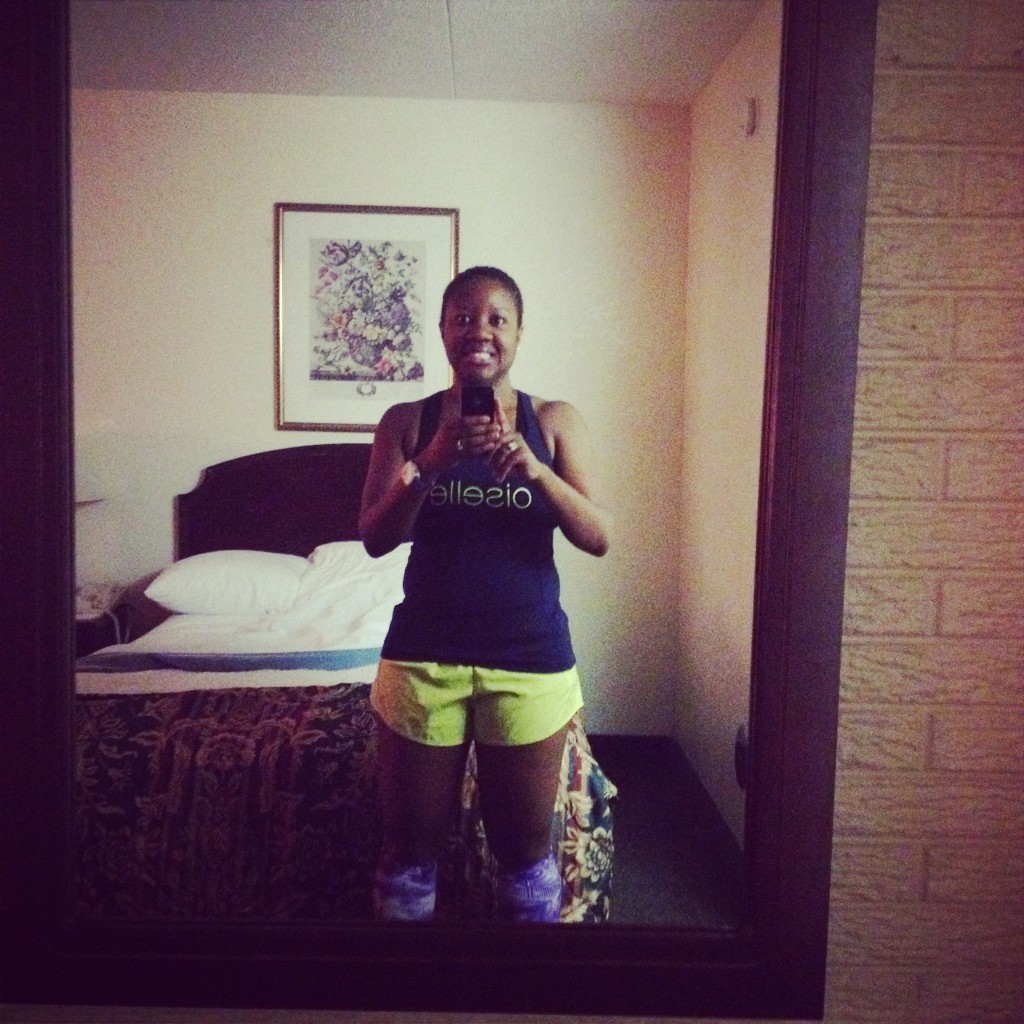 Julie and I headed over to the race start, which was in downtown Leesburg. There was free parking in a garage right by the start, but the line to park was pretty long and we were pretty sure all the spaces were gone. Julie let me out so I could grab our packets. We were fortunate to run into Jenny of Run Jenny Run and Kathryn of Dancing 2 Running while awaiting the porta potty line. You may remember that I ran into Jenny after the Cherry Blossom 10 Miler this year, but somehow this was the first time I had met Kathryn. She was just as sweet as I thought she’d be and we took a couple of fun pics, courtesy of of Kathryn’s husband. I love that in this pic, we’re all wearing Oiselle! 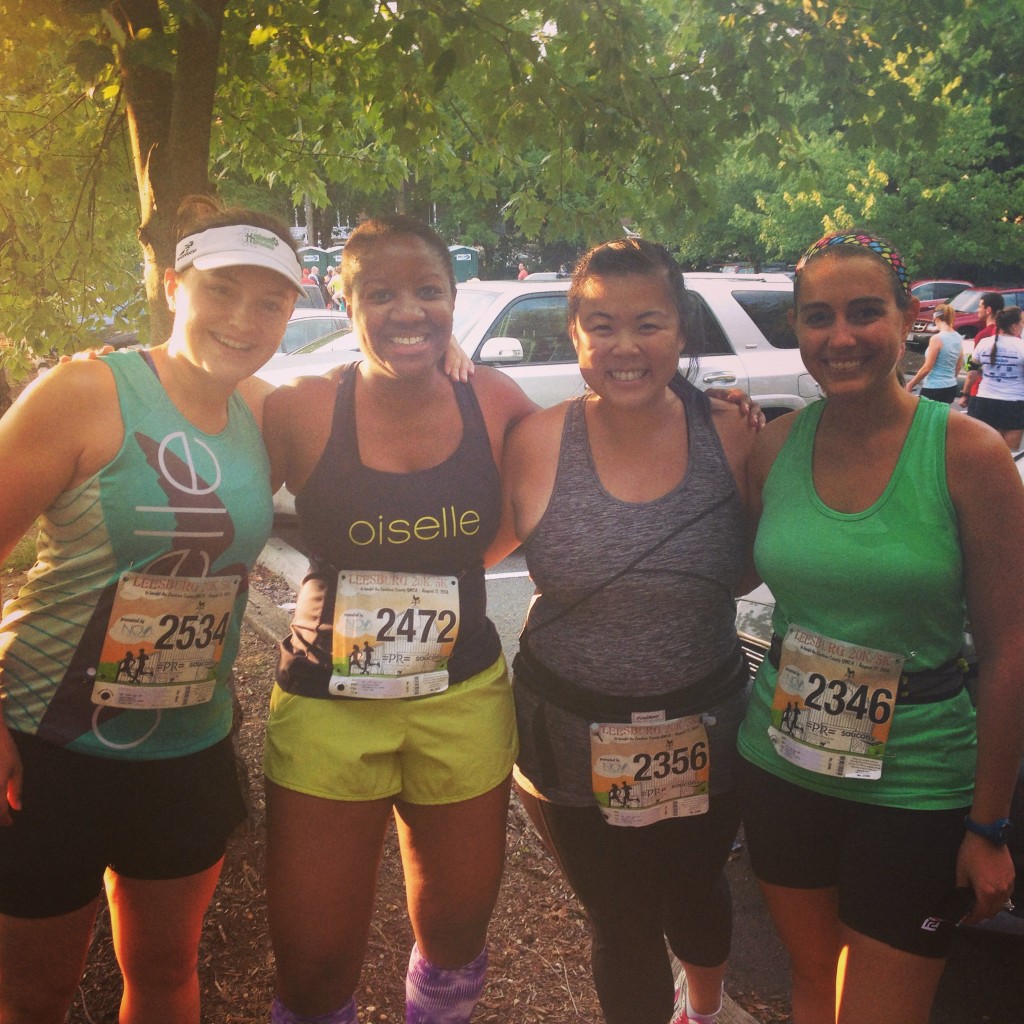 As I mentioned earlier this week, because of the traffic, Julie and I were a bit late starting the race, but we were chip timed so it was okay. Now on the race. I mentally divided the race into 4 5ks in order to break it up. My rough plan was a fast 5k, 2 slow 5ks and then another fast one to finish.

First 5k: I started out WAAAAY too fast and lost Julie by mile 2. I was also a sweaty nasty mess by this point and knew that I’d have to reassess my original goals. I was also not excited about running the rest of the race solo. I love running with a buddy so I just tried to concentrate on making it through the first 5k.

Second 5k: The course was hilly and I tried to settle in but knew I was going to be in for a challenging morning and probably wouldn’t be able to hit my goals. The humidity was intense and while we had shade (thank GOODNESS we were on the W&OD trail for most of the race), it was getting hot as well.

Third 5k: This was where I started to see all my buds on the out and back course. That was really fun and I was able to give a high five to Sue over at This Mama Runs for Cupcakes, see Deb from Deb Runs a few times as well as Julie (who shared some fuel with me — love her!), Jenny and Kathryn. That was really motivating! 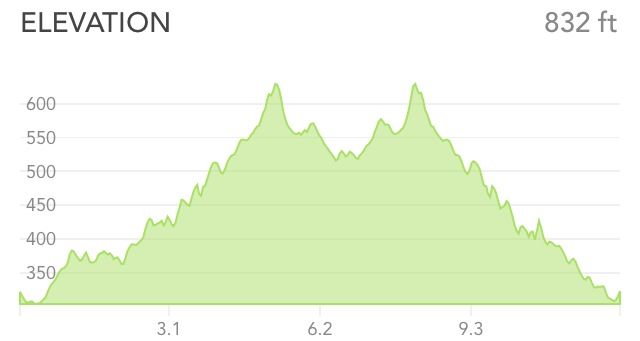 Final 5k: I was so ready to be done at this point. I’d seen all my girls, I was hot and nasty and ready to just take a break. I knew I could push through though and that was a good feeling. There was a guy playing Eye of the Tiger from his deck about half a mile from the finish and that was awesome! 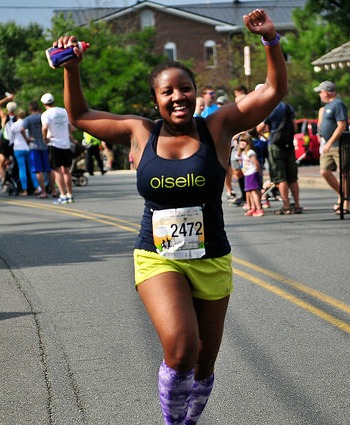 After the race, I waited for Julie so I could see her finish. She came in a few minutes later, looking strong. We hung out for a bit with Deb and her husband and caught up with Dora, who is another super awesome speedy runner. Deb actually won her age group, which isn’t surprising at all because she’s awesome! We saw her get her award and then headed home via a stop at Wegmans for breakfast. 🙂

It was a great race and so well organized – if you have a chance to run a Potomac River Running Race I highly recommend it! As far as my goals, given the heat and humidity I was pretty proud of how I did and know I put forth a ton of effort. And as you can see above, I finished smiling!