So, I ran the 2018 NYC Marathon and this is my official race recap. I have not been writing a ton on the blog – I have honestly been spending more time on Instagram but I have a lot of thoughts on this race and wanted to put them in long form rather than just on the gram. So here we go. 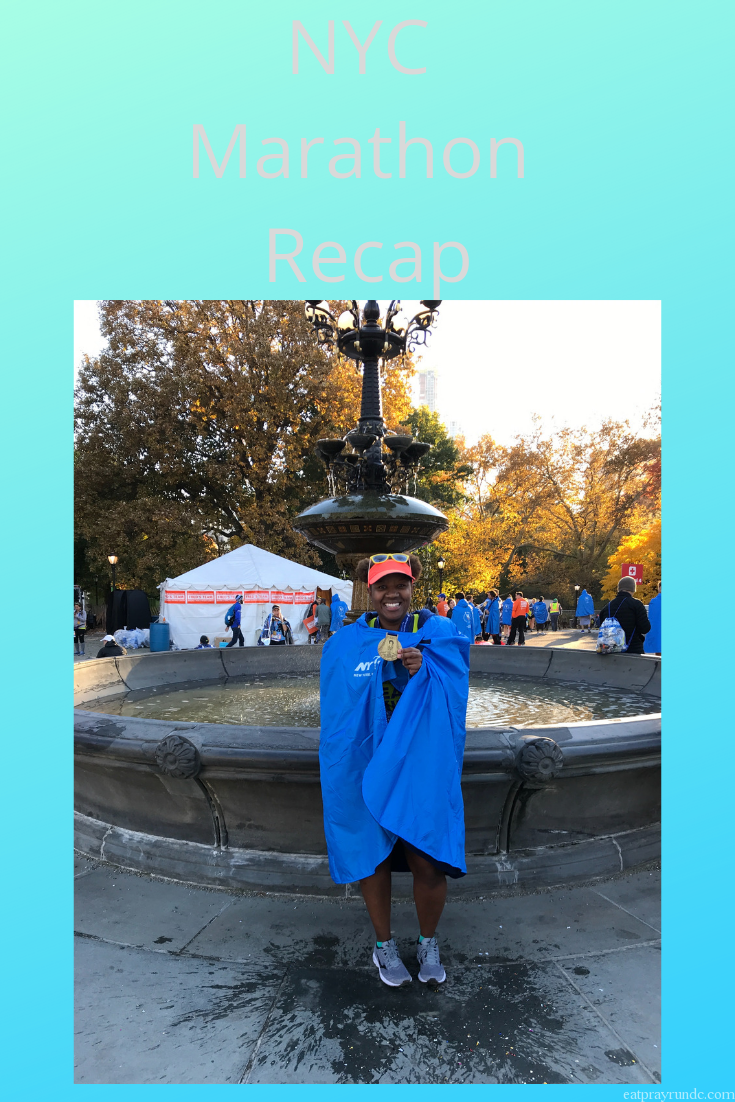 NYC was my 10th marathon finish line (I have two DNF’s that I don’t count in my total) and my 3rd World Major (after Chicago and Berlin). I had a goal of taking it all in and enjoying the experience – no time goals associated with this one. I trained moderately – with lower mileage than I usually do for marathons but more flexibility. You can read more about my training here. I was incredibly excited for the race for a number of reasons:

I had a bit of a hectic lead up to the race. I have been nominated to serve on UVA Law’s Alumni Council and we had our first meeting the Thursday / Friday of race weekend. So I traveled to Charlottesville, then booked it up to NYC Friday later afternoon. Once getting to the city, I quickly dropped my bags and headed over to the expo to get my bib and all the things. I found the expo busy but not crazy and was glad to go on Friday, rather than Saturday. I was in and out in probably less than an hour and got all the things I would need for race day plus a mug, the finisher’s jacket and some fun socks. 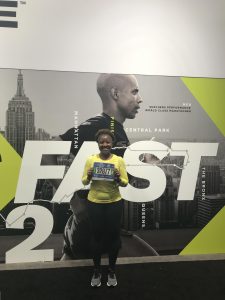 I’ve decided to break up the recap into boroughs for efficiency and memory purposes. If you are considering NYC (and YOU SHOULD, IT’S AMAZING), you should know that race day is a long day under the best circumstances. I was up at 6am for my 7:30am Team for Kids ferry to Staten Island. The ferry was super relaxing – it’s huge and there were tons of seats. I was lucky enough to start the morning with my friend Mandy, who also raised money for TFK. 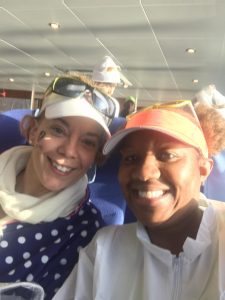 After getting to Staten Island, we took TFK buses to the starting village. The buses took forever – not because we had far to go, but because traffic was super backed up. By the time we got there, walked to our private TFK heated tent (best thing ever!), I had about 20 minutes to go to the bathroom and relax before our TFK volunteers were warming us up and taking us to the starting corral. My corral started at 10:15 on the lower portion of the Verranzzo bridge. Lots of folks expressed disappointment about starting on the bottom half of the bridge, but I didn’t care. Frankly, it was fine. The views were still gorgeous and we had shade, which was nice because the weather was about 10 degrees warmer than I find ideal and we had full sun all day. I did start to tear up before we started. The cannon goes off, you hear “New York, New York” begin playing and you realize that you are about the run the world’s largest and best (in my humble opinion) marathon. Everyone is smiling and happy and I just knew it’d be a great day. I was not disappointed. The Verranzzo is the steepest incline on the course but it doesn’t feel that way.

Brooklyn. Holy crap. So the race runs through Brooklyn from miles 3-12 and it is incredible. The crowds were insane and I just used all their energy. I gave a ton of high fives and tried to acknowledge each person as they cheered for me. I absolutely LOVED Brooklyn – it was fantastic and just so freaking fun. It’s also mostly flat and where I ran my fastest miles of the day (yeah, I still don’t have that whole negative split in a marathon thing down). There was one point where I just yelled out loud, “Brooklyn, I freaking LOVE you!” – and it was not an exaggeration.

After mile 12, we made our way into Queens and my sense of dread started to build. Even though I had run the Queensboro bridge in training, I was still nervous. It’s a relatively steep incline up the bridge and it’s totally silent with no spectators. I slowed down on the bridge but tried to keep my effort the same. You hit both mile 15 and 16 on the bridge – I slowed by about 40 seconds from mile 15 to 16 and then speeded up by about 45 seconds from 16 to 17. The best part of the race was coming…

So as you come down off the bridge into Manhattan, you just start to see the crowds. And it’s LOUD! Now, people called this a wall of sound and I suppose it was – but frankly the WHOLE FREAKING COURSE IS A WALL OF SOUND. And I had my name on my shirt (a MUST) and so I had people literally CHANTING my name the whole way. So while Manhattan was insane, I felt like the whole race was insane – in the best possible way. So here’s the thing about this part of Manhattan…you start on First Avenue at 59th Street and run all the way up First until you hit the bridge into the Bronx – around 127 Street. So, that’s a long way. I didn’t realize it was about three miles on First. So be prepared for that!

You are rewarded with the Bronx. The Bronx is a short part of the race – just over a mile – but I loved it. The residents of the Bronx were PARTYING. They were literally dancing in the streets and it was amazing. There was a man with a megaphone you kept yelling, “you can walk but you can’t quit.” This is why the NYC marathon has such a high finisher rate – I can’t imagine these crowds letting someone walk off course unless they were SERIOUSLY injured. The Bronx was amazing. I was hurting but happy which is a weird feeling in a marathon. As I was approaching the (THANK GOD!) last bridge to take us back into Manhattan, I saw a TFK Coach, who said “do you know where you are?” I said “I’m approaching the LAST DAMN BRIDGE!” and he smiled and said, “yep – go have fun.” There is also a fantastically happy older woman who sits on the bridge with a sign that reads “LAST DAMN BRIDGE.” I was SO happy to see her! And you know, to cross the bridge.

So finally, we cross into Manhattan for the second time that morning. But this time it’s different because the end is near. The race takes you into Manhattan via Harlem and then you are on Fifth Avenue and 135th Street. This is significant for a few reasons. Remember when I said that earlier in Manhattan you start on First Avenue at 59th? Well, I know that we will be about a quarter of a mile from the finish at Fifth and 59th. So 135 – 59 = A LOT OF BLOCKS. Also – and no less important – my friends, my Oiselle running family are at 105th. So I know I have 30 blocks to get myself together and then see my people. The time didn’t exactly fly by but soon enough – there they were. My friends! I was so DANG happy to see them (see picture evidence below). I had an incredible group of people cheering me on as I came through the Oiselle cowbell corner and it was a highlight of my race – and definitely the best thing about the mile long incline up Fifth Avenue :). 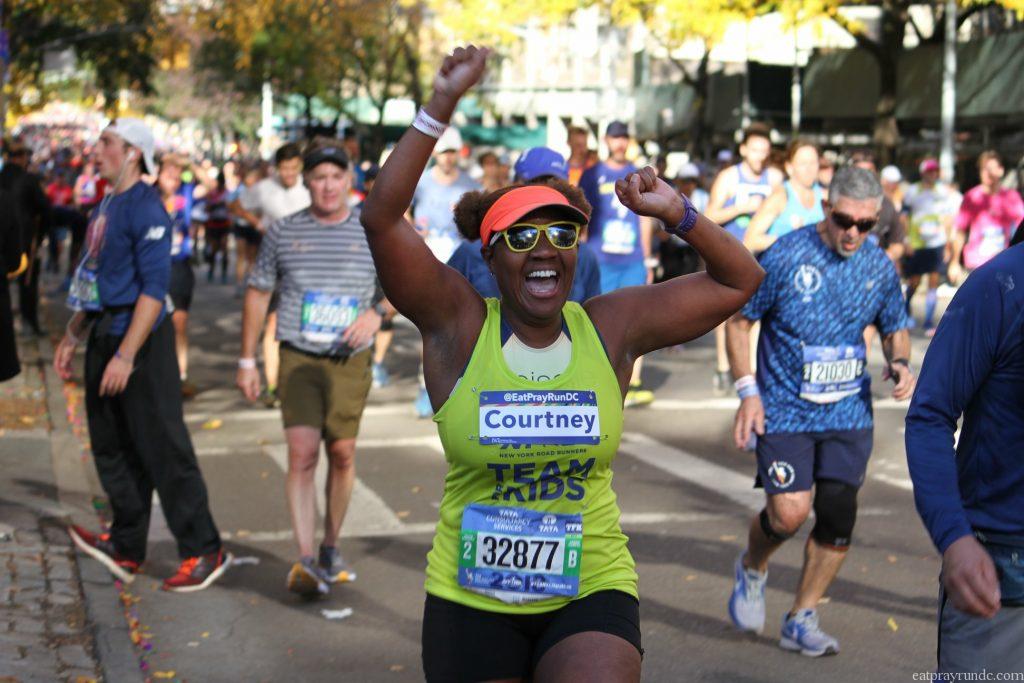 As you can see, I was super happy to see my friends. This picture also really captures how this race felt for me. Yes, it hurt. Yes, it was hard – in fact, this is one of the hardest marathons I’ve run. Yes, I was tired and sore and crampy near the end. BUT I freaking loved it and knew from mile 5 that I would be striving to run this one again. I’m not sure when – but I know this will be one that I repeat. And I HIGHLY recommend you put this on your bucket list – ain’t nothing like NYC. Oh and I ran a 4:50 in case you are curious. Out of ten completed marathons, this was my fourth fastest (after Berlin, Wineglass and MCM) but the MOST FUN by far! Oh – and receiving the poncho was every bit as glorious as I thought it would be. Don’t check a bag – get the poncho – trust ya girl on this one!

Have you run NYC?