Before I left for Europe in the fall of 2017, I scoured the internet for posts about traveling solo as a black woman. I found a few here and there, but honestly I couldn’t find much that helped me feel comfortable. Now, I felt pretty comfortable to begin with because I knew the places I were going were big, metropolitan cities and also I am comfortable traveling solo. However, I made a mental note to write a blog post about traveling solo as a black woman in the hope that it will help encourage other black women to travel solo. 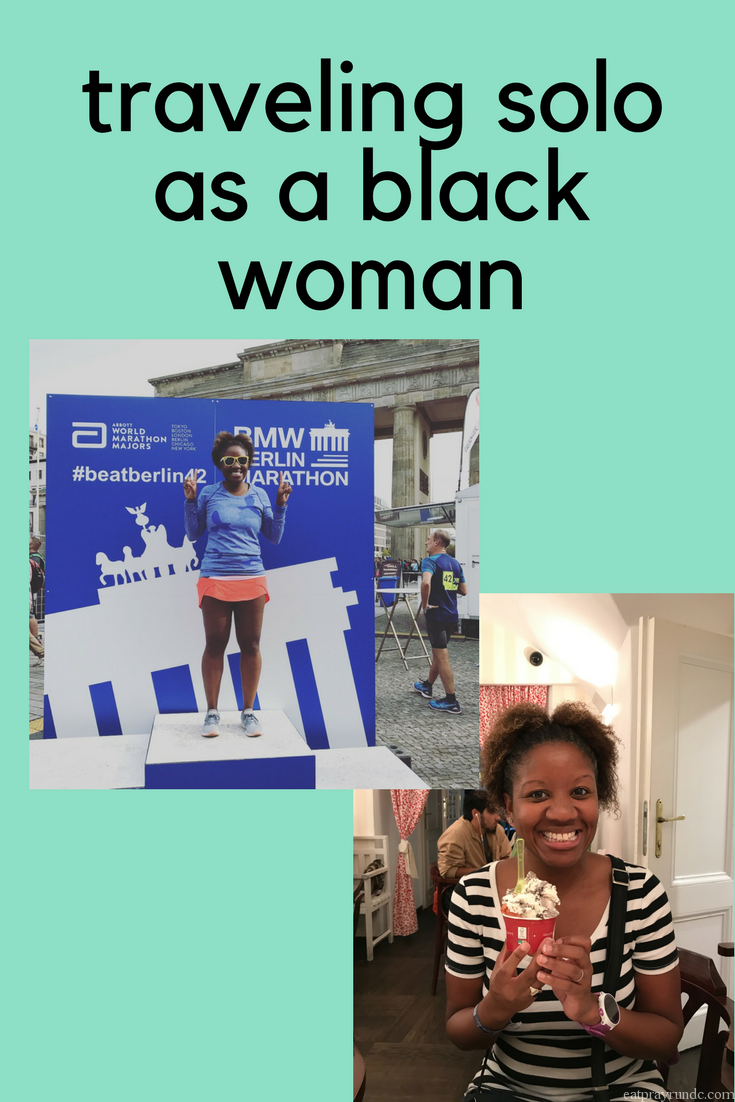 First of all, I am a definite advocate of solo travel. I travel frequently for work and so I am used to traveling solo. I think if you are planning solo travel, starting closer to home is a good idea just to get you in the mindset for solo travel. I have been traveling solo for years, so planning to travel to Europe solo was not incredibly intimidating.

The things I was concerned about were safety and any potential racism related issues. I knew that as a black woman, I would stand out in Berlin, Prague and Munich. So I did a TON of research about where to stay. As I mentioned in my logistics post, I read the Rick Steves guidebooks (you can pick them up here) for both Germany and Prague and they were incredibly helpful. I knew I would stand out in Germany and Prague but felt pretty well prepared because of the research I had done.

Now I will note one thing that I kept in the back of my mind. In my Germany book, in the Berlin section, the book recommended avoiding a particular area of the city at night if you were black or openly gay. That gave me pause but I appreciated the note – the area of the city mentioned was not a part I had planned on visiting anyway, but still. I am very aware that racism is everywhere, but I will say that I did not encounter any locals that were anything but gracious in Berlin and Prague. Berlin was full of runners for the marathon and runners are a great group to begin with. But I also toured some and met non-running locals who were kind and friendly and helpful and curious (in a nice way). I felt very safe and although I did not see a TON of black women in either city, it was not an issue for me.

Munich was a bit of a different story. When I arrived in Munich, I was followed by three different men within my first hour of being there. Of course, I firmly told each of them “NO!” (complete with a finger wag) and that ended that – but it did not give me the best impression. However – it was Oktoberfest, and I was traveling alone as a black woman. I did not feel necessarily unsafe, but I did not love the attention – although like I mentioned, it didn’t persist after I said NO and it was only that first day. I actually did not love the area of town I stayed in – it was super close to Oktoberfest grounds but since I wasn’t actually interested in all the crazy partying and was solo, I didn’t love the immediate area. I will say that the area itself was super cute and I think I would like it a lot if it wasn’t in the middle of a big huge party, with big groups of drunk men. So there was that. Not the best choice on my part but the hotel was delightful and so that helped.

Overall, if you are a women of color considering traveling to Berlin, Prague or Munich – go for it! I seriously had the best time and would take this trip again in a heartbeat. I hope to be able to go back soon – solo or with friends.

Specific questions about my trip that I haven’t already answered? Curious about solo travel as a black woman? Let me know in the comments!